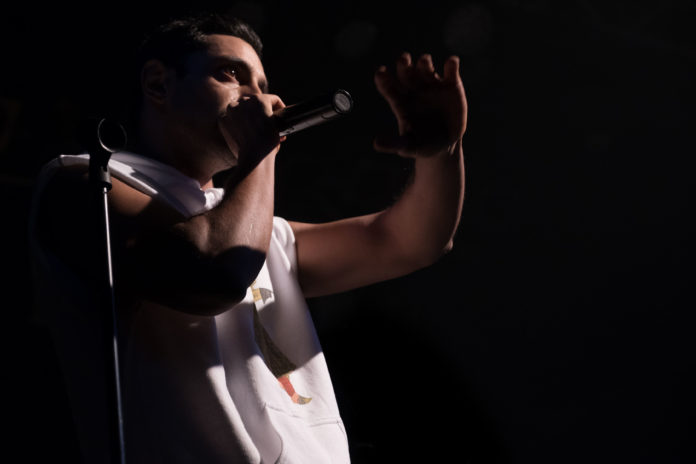 With the release of the film, Mogul Mowgli, Riz Ahmed cinematises the message from his album, The Long Goodbye and Saadat Hasan Manto’s short story.

In March 2020, British rapper Riz Ahmed released his album The Long Goodbye. One of the songs on the album is called Toba Tek Singh. Ahmed said: “‘No man’s land’ is an important concept for me, one that I keep returning to in my work.” The story inspired the song as Ahmed grappled with the idea that maybe no man’s land isn’t no man’s land. Maybe it’s ours, because there are so many of us there.”

The film co-written by Ahmed and Bassam Tariq, won the FIPRESCI Prize in the Panorama section of the 2020 Berlinale.

In the film, Ahmed plays the rapper, Zed (known to his family as Zaheer). He is about to make his big break by going on a world tour. But before he heads on tour, he returns to his childhood home for the first time in many years. Immediately his mother burns the peppers – a cultural ritual meant to take out the evil eye – and she tells him the evil eye is following him. Soon after he is diagnosed with a muscle degenerative autoimmune disease. As his body begins to shut down on him, Ahmed is forced to reckon with the loss of his dreams. When he is at his lowest, he begins to hallucinate memories from the past. In particular a qawwali singer from his childhood wearing a rose garland covering his entire face appears.

In the movie Ahmed raps many of the songs from The Long Goodbye including the track “Where are you from”. Just like the album, his character is trying to find where he belongs in a world that tells him he doesn’t have a place. But while he raps about unbelonging, he doesn’t understand his own roots. Interspersed throughout the story is flashbacks of a train with people headed to some place. There is a young boy hiding and whispering something beneath his breath. While his aging father looks after him, his father mouths those same phrases. It’s also mentioned that his father survived the brutal violence that unfolded during the 1947 Partition of India.

To accompany the release of the film, Ahmed released a special track called Once Kings. The song connects the message of the film.

The chorus goes: “Once we were kings, when will we be kings

No more salaam, Mo Salah we believe in

I’m told we can live if the reds would just win.”

Zed like Riz Ahmed is navigating his identities as a brown, British, Muslim man in a post-Brexit, Islamaphobic Britain. He is dealing with the generational trauma of what it means to have survived the brutality of the violence. At the same time, he is dealing with the current violence of racism and Islamophobia.

In an interview with NME, Ahmed said: “It’s about events forcing you to face what really matters; fame or family, success or spirituality, the pressure and desire to represent your people or the need to preserve your own health and well being. I think a lot of people can relate to this feeling of re-thinking their priorities, during this pandemic.”

The film will be shown at the virtual European Film Festival from November 12-22. Check out the latest edition of the Top of the Vox for more information on the festival.