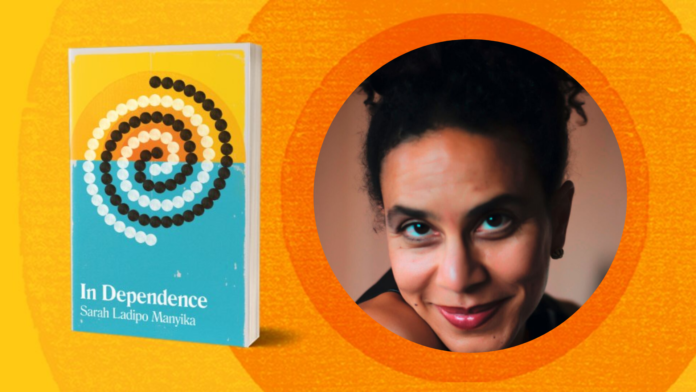 Researching for my interview with Sarah Ladipo Manyika, I came across a Facebook post where she expressed her joy at being in South Africa. Manyika was in South Africa for the Open Book Fest in Cape Town and SA Book Fair in Johannesburg. There were a number of comments asking why she was attending the book festival at a time when South Africa was gripped with xenophobic violence. Manyika is born of a British mother and Nigeria father.

We took our seats in the quiet courtyard of the Women’s Jail and Constitutional Jail. I know this was the first question I must put to her. Xenophobic attacks against people from other African countries have unfortunately become a regular occurrence in South Africa. There’s no way to escape. Manyika alludes to this in her response.

It’s for that reason she was so excited to be attending the book festivals in South Africa. Manyika says the fear of the other is driving these troubling times. Her solution to this: “I really feel like art can often be a way to help people be less fearful of the other.” She says book festivals celebrate the writing on people trying to shine a spotlight on these issues.

Manyika was in South Africa particularly to promote her book In Dependence. Released in 2009, the book has sold over three million copies worldwide. It was being rereleased just over ten years after its initial release. In Dependence tells the story of Tayo Ajayi, a Nigerian scholar who goes to study at Oxford University. There he meets Vanessa Richardson, the daughter of a former colonial officer. It’s a love story on two levels as Manyika says.

Manyika has a unique writing style. Many authors have many reasons why they write and for whom they write for. For Manyika, both her books – In Dependence and Like A Mule Bringing Ice Cream To The Sun – were written because those were stories she wanted to read.

“This was a book I wanted to read that I wasn’t finding. I wrote it primarily for myself,” she said, adding that she didn’t realise it would be read by so many people.

For In Dependence Manyika says she was looking for a love story set in the 1960s. “Similarly with my second book, it’s a story of an older woman and I was driven to write that story because I wasn’t finding. And I particularly wasn’t finding those stories of older, black women,” she said.

In In Dependence the main characters meet a lot of obstacles to their love story. This includes racial differences as well as cultural and class differences. Manyika says she chose to situate her book in the 1960s because she “wanted to imagine what the lives of people would be at that time.”

While it’s not based on a true story, Manyika says her parents did meet in the 1960s and did experience familial rejection. “So this could have been their story but it’s not,” she said, adding that her curiosity as a child about her parents played a role.

It has been over ten years since the book was released, and it is still so popular evidenced by its re-release. Manyika touches upon the books’ relevance saying that “a book reads us as much as we read a book.” She says that people read books through the lens of the times which they’re living in.

“I had set out to write a book that would endure and that would be timeless. I didn’t realise that the issues I was describing in the 1960s would still hold pertinence in the 1990s and we would still be talking about these issues in 2019. So in that sense, nothing has changed,” she said.

Manyika laughed when she recounted how she was embarrassed to go back and read In Dependence after she had completed writing it. However, she was pleasantly surprised when she read the book after its reissue.

“I kept turning the pages and wondering what was going to happen. It might sound odd but the thing is when you’re writing a novel you imagine various scenarios. A decade later the details were a little…,” she said trailing off.

“Going back to an old book is to see sometimes we can be too hard on ourselves,” she said, adding that she fooled herself into thinking she was bad at plotting. That could not be further from the truth. In Dependence plays out beautifully without any plot holes or unanswered questions, except for the ending of course.

The open-ended conclusion of the book was entirely intentional.

“I’m not trying to tell the reader what they should think. I leave it open and for the reader to use their imagination,” she said. That’s part of the fun of reading of course. Being able to decide for yourself where you want the characters to end up.

Besides her own writing career, Manyika has many hopes for the future of literature on the African continent. In particular, she hopes there is the creation of an African canon.

“It is exciting to see how many new voices we have and how many news authors and titles we have but there is still so much room for many more stories to be written,” she said. Manyika says that if there are many African writers writing different stories, there won’t be such a burden on one writer to represent everybody.

To end off the interview, I asked Manyika what advice would she give to young authors. Her advice might have been directed at young writers but it truly resonates for all. She says we are living in the age of FOMO (fear of missing out). Manyika says a lot of people, especially young people are worried about falling behind and not being famous.

That’s why her advice is: “I would try and encourage people to stay focused on what you’re passionate about and things will work out in their own time.”

Both of Manyika’s books are available online and in all good bookstores.

All images provided by Pan Macmillan