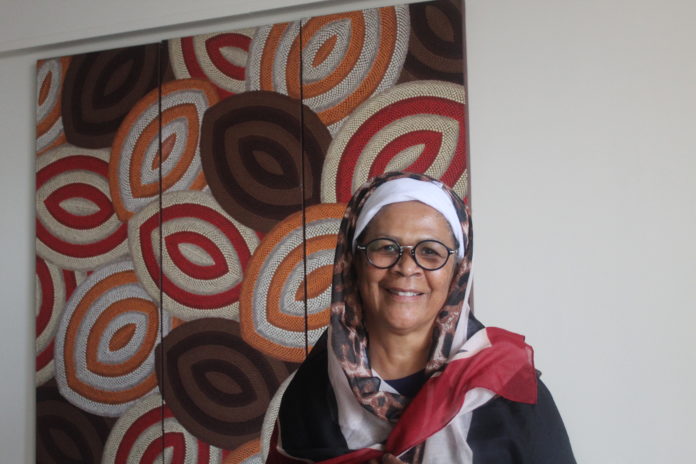 In the conversation on the intersection between Islam and gender, there is no name quite as well-known as Professor Amina Wadud. Both lauded and lambasted for the work she has done globally, Wadud’s journey in South Africa began in 1994 when she delivered her still contentious, but momentous pre-khutbah (sermon) at the Claremont Main Road Mosque in Cape Town. A quarter of a century later in August, the American academic visited South Africa to reflect on the progress of her and her peers’ activism toward an egalitarian Islam.

For those interested in what’s known in progressive Muslim circles in South Africa as ‘Gender Jihad’ or the pursuit of gender equality in Islam, it’s near impossible not to have encountered Wadud’s work. Born into a Methodist African-American family, Wadud became Muslim at the age of 20. She was a Professor of Religion and Philosophy many universities including the Virginia Commonwealth University and is one of the founders of civil society group Sisters in Islam. Known as the ‘Lady Imam’, Wadud continues to lead prayers of mixed congregations all over the world.

The Daily Vox caught up with her when she was in Johannesburg for the last leg of her tour. Wadud was previously in Cape Town and Durban celebrating the 25-year anniversary, delivering lectures and even hosting a khutbah-writing workshop at the University of Cape Town.

Reflecting on the headway of progressive Islam in SA

“I like thinking about what it was like 25 years ago and the three major cities I went to and seeing what the climate is like since 25 years has passed. I also [wanted to see] what kinds of projections we might have 25 years into the future and see how the movement has taken shape over time and place,” Wadud said.

Wadud says it was difficult to track how much the movement has grown because she doesn’t have access to the numbers. But she says people who were committed to building an inclusive space for Muslims 25 years ago continue to do so.

“We had the first-ever khutbah-writing session in the world and all of Islamic history,” Wadud said in her reflection. “In fact they kept on having to raise the ceiling of the people they would be able to include. [The number had to be capped because] it’s supposed to be a workshop, and if you have too many people then it’s just unwieldy. There was an interest and there were people who had given the khutbah themselves or were trying to gain the courage to do that,” she said.

Also, Wadud says the most vibrant manifestation of queer Islam, which includes people of colour and is outside Europe or North America, is here in South Africa. The progressive South African Constitution means many migrate here, fleeing persecution in other countries because of their sexual orientation.

“For me, I just feel like things are growing. But I think I may have been a bit too overzealous in my estimation,” Wadud said.

One stumbling block towards a more inclusive Islam is that many mosques are not open to women. “I am aware that women still don’t go into the mosque in Durban, they don’t go in Joburg either: What’s up with that?” Wadud asked. For years, there have been movements by South African Muslim women to gain access to prayer space in certain mosques, with little success. Wadud believes that women — and others that face inaccess — should build alternative spaces.

“My standard advice, which I have been giving all around the world is: If you build it, they will come,” Wadud said. “I don’t know why people are stuck on the older models of mosque community centres instead of proliferating alternative spaces,” she added.

Alternative spaces is in the history of Islam in South Africa, Wadud said. When Muslims migrated here, they established their religious identities using models they were familiar with but without the means to be able to replicate those exactly. “Now that they have been established, they have the money, they have the numbers but they’re not the sum total of Islam in South Africa,” Wadud said.

“Building alternative spaces is what the global movement of inclusive mosque spaces is showing us,” Wadud said. “We don’t have to, because it really isn’t going to happen anyway, wait for permission for people who have been gatekeeping us for decades and decades and decades. We don’t have to wait for them. The more alternative spaces that are available, the more people will come to them,” she said.

Wadud referred to The Women’s Mosque of America in Los Angeles as an example. The mosque only has the resources to come together once a month but didn’t wait for everything to be in place to move forward. “With whatever resource they had they were able to galvanise the support of women who also were looking for alternative spaces,” she said.

After September 11 in the US, more grassroots Muslim organisations sprung up outside of the “patriarchal old boys network”, Wadud said. “People wanted to have more settings where they could rally behind the identity that was and still is under siege of Islamophobia,” she said. Muslims set up public places that were not always spiritual places as alternative spaces for worship. That model could be followed here, she said.

“You could have information centres, youth centres, intersectional centres, social justice centres and within it — because you have people who identify as Muslim — is a component of nurturing the Muslim identity in those spaces,” Wadud said.

But Wadud says she also knows how debilitating it is when gatekeepers of Islam try to shut women down by saying, ‘That’s against Islam’. “We’re all held hostage, but we did not give them lifetime authority over us. In the work that I’ve done, one of the ways they deter you is to say, ‘You can’t do that in Islam’,” she said.

But there must be a push forward. “People need to stop moving from the top-down and move from the bottom-up,” Wadud added.

The Divine feminine and LGBTQ Muslims

In many of her talks given across the country, Wadud focussed on the “Divine feminine” which, for her, marks the trajectory into the next 25 years. Prophetic teachings indicate that God has at least 99 names,  some of which are masculine and others which are feminine. “Allah has masculine and feminine attributes and yet Allah does not lose that Oneness,” Wadud said. A move toward the Divine feminine can correct the global “overproduction of masculinity to a level of toxic” by paying more attention to the feminine “encoded within the Islamic tradition and the Divine,” Wadud said. “We need to pay more attention to it,” she said.

Wadud has also been doing work in the theological and social justice component. During her trip, Wadud presented research completed in 2018 in a closed session on LGBTQ themes and Islamic classical sources. Wadud aims to eventually publish the research and to conduct workshops to talk and sound out some of the ideas. “It’s a complicated [topic] and yet the complications in my mind are interesting and informative. But they demand their own time. If you do not give it time then the basic conclusion that I’ve come to will be more difficult to understand, let alone accept,” Wadud said.

“The main reason why I am a known advocate for LGBTQ rights in Islam is because when I came up against the gatekeepers who would say, ‘You can’t be gay and Muslim’, I just thought, ‘The audacity’,” Wadud said.

Wadud says there is a tendency in Muslim communities to view queerness as straightforward. “The black and white answer is that you cannot be both gay and Muslim,” Wadud said. “That is not factually true, it is not historically true, it is also very useless, let alone the potential harm of it. So where do we have a discussion where we can talk about Islam and sexual diversity where we take in all of the nuances? It takes time,” she said.

For Wadud, the bottom line is that the Qur’an ensures that every human being has dignity. Human dignity is violated with homophobia. “I want to keep it ambiguous, I want to keep the conversation open. It is about fluid identities isn’t it?” Wadud said.

Islam is fluid and so are people

“Islam as a living process,” Wadud said. “Certainly, people who have been invested in living that process for hundreds of years have developed the idea that they have the exact purview over it. But if Islam is a living process, then it can never be captured from one time to another time except in the lives of the ones who adhere to it,” Wadud said.

In the US, Muslims  have taken to different forms of artistic expression: the US Islamic hip hop movement — which went global—, spoken word and performative arts, visual arts. “We have fluid identities. To keep these affirmations as part of what it means to be a Muslim in the 21st century helps to keep Islam vibrant and vital. You just need to own it,” she said.

“People need to take possession of Islam again and they need to understand that it is for all times and all people in all places, so it’s got to be for you and me. The old notion of Islam as a fixed thing, a finished thing, the notion that it is in and of itself prone to stagnantion is in fact stgnant and not tenable,” Wadud said.

In her work Wadud maintains that not only is it necessary to remind women that Islam belongs to all of us, but also to feel that it was necessary for women to give input to the ways in which the mainstream and dominant models of Islam work.

“It is understanding that Islam is alive and we keep it alive by giving agency to ourselves to create spaces and expressions through ourselves,” Wadud said.