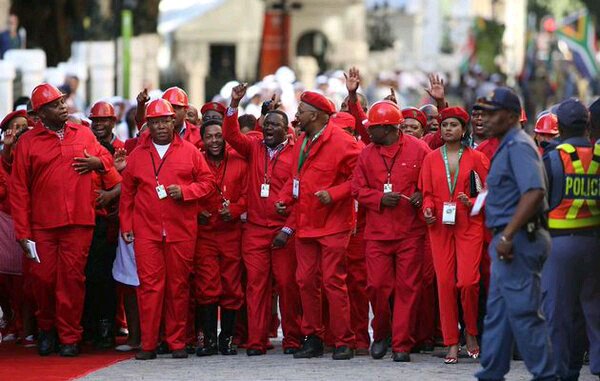 It was the leastÂ surprising moment of the evening, the Economic Freedom Fighters were invited to leave the National Assembly on Thursday evening after repeatedly disrupting President Jacob Zuma’sÂ State of the Nation Address. But if their departure was expected, and some might even say, carefully choreographed, then it was certainly a relief that there was no repeat of the same scenes that accompanied the EFF’s eviction from parliament during the 2015 State of the Nation address.

But the EFF did not leave the chamber before giving South AfricaÂ a new slogan to translate to a hashtag.

“Zupta must fall!” they chanted.

It is the newest slogan from the EFF in parliament after their “Pay back the money” campaign won concessions from the president’s legal team in the Constitutional Court this week.

Various members of the EFF disrupted the proceedings through points of order raised with the speaker, who appeared to be far better prepared to throw the rule book at the Fighters, and avertedÂ last year’s disaster.

As they left the chamber one EFF member is reported by News24 to have shouted, “When we come back next time, you will not be our president.”

Speaking to the media following his departure from the national assembly, in what he termed the “real State of the Nation Address”, Â Malema said the EFF had left after it had made its point.

“You cannot agree as a legitimate leader of a legitimate party, elected by the people on the principal of anti-corruption, agree to be addressed by a criminal, which has admitted that he is a thug, that he has stolen money and he is now prepared to pay back that money.”