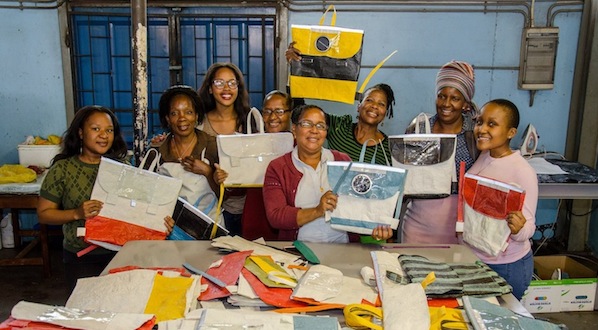 An idea to turn plastic bags into school bags that double as solar powered lights that can enable leaners to study after dark has just won South African Thato Kgatlhanye (21) second place for young African entrepreneurs.

Kgatlhanye is the founder ofÂ Repurpose Schoolbags,Â a company that creates school bags from up-cycled plastic bags. Integrated solar power packs allows the bags to be charged during the day so that they can be used as lamplights for evening study.

The business employs eight full time members of staff and plastic bag collectors who have collected up to 4 000 plastic bags to date.

Kgatlhanyeâ€™s idea won her second place for The Anzisha Prize; a competition that awards young Africans between the ages of 15 and 22 who have started innovative businesses and are creating employment and opportunities in African communities. First place, and a $25 000 prize, went to Alan Nteff (22) from Cameroon, who developed GiftedMom, a cellphone application to help improve the health of pregnant women in underserviced communities.

Kgatlhane was one of the five female finalists, including one teenager who started a company that makes bicycles from locally sourced bamboo, and another who started her own hacking school in Kenya. She walked away $12 500 (about R140 000) in prize money.

Kgatlhanye has a BA degree in brand management from The Vega School of Brand Leadership and has also been selected for an internship in New York with renowned entrepreneur and marketing expert Seth Godin.

Finalists for the annual Anzisha Prize win an all-expenses paid trip to a week-long entrepreneurship workshop and conference that takes place at the African Leadership AcademyÂ (ALA) in South Africa. The ALA is a tertiary institution that recruits some of the most brilliant learners from around Africa and teaches them an advanced leadership- and entrepreneurship-focused programme at a world class campus, situated in Honeydew, Johannesburg. Many of ALAâ€™s alumni have gone on to study at the worldâ€™s best universities, including MIT, Harvard and Stanford.