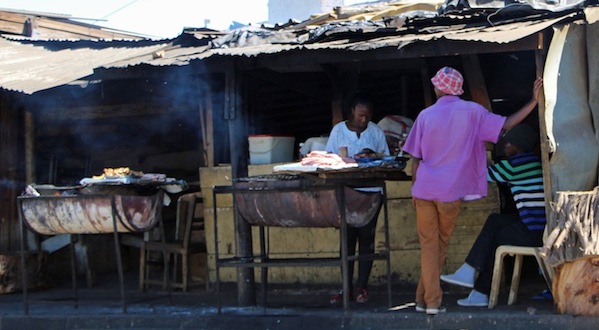 My Tuesday morning was marred by yet another blackface incident. For some reason, this took me by surprise; I didn’t think we would have to deal with this issue again so soon.

“At least give us a break, let us get angry about any of South Africa’s other racist incidents because there are so many,” I thought to myself. It was just last week that we were subjected to the disrespecting of the Sotho-speaking nation, by some of South Africa’s leading news outlets. Yes, I am referring to the Mokonyane buttocks headlines.

Why are we, black people, who make up the majority of the country, subjected to scorn and disdain on such a regular basis? What did it serve those Stellenbosch students to bring back blackface just weeks after the UP incident, which elicited thousands of tweets and many columns painstakingly explaining all the reasons why blackface is wrong?

Well, because that is how racism operates. Because periodically, you have to stop and explain to people, like the UP girls and the Stellenbosch boys, why the humanity of black people should be valued.

It seems, there is always one more thing.

And today, that thing is Heritage Day. (Or is it Braai Day?)

In my eyes, this is yet another inconsiderate and unnecessary thing we have to deal with each year. In a recent column TO Molefe describes Heritage Day as “the white supremacist-capitalist-patriarchy’s day of sponsored forgetting”, and explains (again) what the problem with celebrating it as Braai Day is.

As Stephen Lowry points out in his book Know Your National Holidays, the day previously known as King Shaka Day, was renamed Heritage Day and was to be commemorated as a “day to celebrate the contribution of all South Africans to the building of South Africa”.

As another blackface incident fizzles down; we prepare ourselves for Wednesdayâ€™sÂ distraction in the form of braai vleis and beer. Instead of focusing our collecting national energies on celebrating our heritage, we argue about the comercialisation of the day and the ignoring of non-dominant cultures in our country.

What comes after tomorrow? Will there be just one more thing to explain?