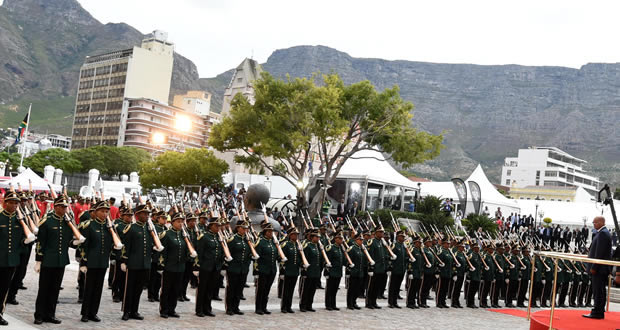 Parliament was in shambles at the 2015 State of the Nation Address held in Cape Town on Thursday night, with signal jamming, expulsions and walkouts leaving half the House empty by the time President Jacob Zuma delivered his speech. THE DAILY VOX TEAM asked South Africans what they made of the way things played out. Moira Brown, 61, retired teacher, Mount Edgecombe, KwaZulu-Natal
That had to be the most embarrassing opening of Parliament ever. I felt that the whole thing was a shambles â€“ it was as if the speaker of the house [Baleka Mbete] had set up the EFF. She almost anticipated that they were going to disrupt the speech and so she led them to that point where she felt she had the right to evict them. That violence that the so-called police meted out was totally unnecessary. That woman that they beaten up quite severely â€“ I donâ€™t think she posed a threat to armed men at all. I admire the action of DA, Chief Justice Mogoeng Mogoeng and UDM leader Bantu Holomisa who walked out in dignity against the use of police. What I saw was reminiscent of apartheid days, where the police have now become the bully boys for the party or state. I actually cannot believe anybody thought they could get away with the signal scrambling: we have such a strong media in South Africa. There was a certain amount of censorship, which is very unhealthy because we have a freedom of press and a constitution that protects us. Lebo Zwane, 24, student, Berea, KwaZulu-Natal
The president seemed to have a high influence on the intelligence team, because after the DA asked about the signal, you could see that the ANC had communicated and the signal was back on â€“ which to me is not indicative of the freedom of speech we have in the country. I understand the chair kicking out Julius Malema and Floyd Shivambu, but the other members raised a point of order. Even before they could express what they wanted to say they were also chased out of the house, which goes to show that it was planned by the ANC that whoever goes against them will be chased out of the House. On the footage shown online, you could see that even women were manhandled â€“ which is contradictory to the protection of women against violence the president spoke about. The whole thing was planned: Zuma was prepared for what happened, and it did not affect him at all. South Africa expected the speech â€“ millions of people were watching â€“ so he did the right thing by continuing. I might not agree with what happened but he did the right thing by continuing. Mandlakazi Mzinyathi, 26, student, Musgrave, KwaZulu-Natal
First of all our right to freedom of communication was breached. How can the signal go off like that when journalists are there trying to live tweet? What does that say about our democracy?Â Iâ€™m not sure about the rules of parliament in regard to kicking out MPs, but I did not like manner in which the kicking out was done. Those white shirts just came in and there was a lot of violence. Also the feed just kept on showing us Baleka Mbethe and Thandi Modise instead of the eviction of MPs: thatâ€™s censorship. It just shows that our democracy is in trouble.Â It was also very embarrassing seeing our leaders behave like that. It was awkward when the president continued as if nothing happened, I think he should have at least said something â€“ anything â€“ because he is our leader after all. Bruce Kreush, 65, self employed, East London, Eastern Cape
Itâ€™s a total disgrace! The rest of the world is watching South Africa while MPs run around in Parliament. Firstly, itâ€™s not the way to treat each other â€“ MPs are meant to be dignified and honourable. Where is the humanity? And this is not the way to address issues. At least when Madiba was there he actually got things done.Â The government jumps past issues. For example, ZumaÂ neglects education in South Africa and itâ€™s decaying: from the varsities down to the primary schools. I see a lot of neglect from teachers in the rural schools, and its worrying. Teachers get to school late and leave early. Civil servants do as they please here. Just like the government. And if the government doesnâ€™t prioritise teachers, how can we expect teachers to prioritise learners? Fezile Matiyana, 37, general worker, East London,Â Eastern Cape
I think the one person that was making the situation worse there was Baleka Mbete. She was put there to address points the same way and be neutral and demonstrate equality. But she fuels the conflict as she protects Zuma, because sheâ€™s not even protecting the ANC, sheâ€™s just protecting Zuma. And as long as sheâ€™s there nothing will be right.Â The EFF and the DA were correct to question when the money will be paid back. They were correct to defend our freedom of expression. ButÂ [the ANC] want to refuse people permission to express themselves, as if itâ€™s a privilege. They want to control what we see, because they are trying to hide the erruption that occurred.Â We clearly donâ€™t have a president: Zuma is not our president, Baleka Mbete is South Africaâ€™s president and sheâ€™s running the country into shame and chaos. Lee Takura, 31, law student, East London,Â Eastern Cape
I couldnâ€™t even listen to that speech. President Zuma was just reading and delivering what was written for him. He makes too many promises â€“ reciting the same speeches but not delivering change in the country.Â The ANC isÂ vandalising peopleâ€™s brains, giving them what they donâ€™t want. What they did last night was undermining the constitution.Â [Parliament] is like a church. You could never bring a gun into a church. So how can they allow officers to enter with guns? What was the intention of those guns? Then blocking the signal and fixing cameras on the speaker, so that the rest of the world cannot see a fragile democratic foundation being dampened. Itâ€™s just unacceptable and unprecedented.

– Voxes have been edited for brevity and clarity.