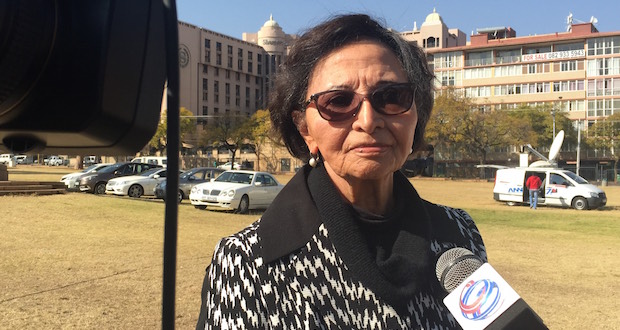 Alongside Lilian Ngoyi, Rahima Moosa, Helen Joseph and Albertina Sisulu, Sophie de Bruyn led a march of 20,000 women on the Union Buildings in 1956 in protest against the pass laws. De Bruyn is the last surviving leader of the march. KHADIJA PATEL caught up with her in Pretoria, to find out what inspired her devotion to the cause, and how she feels about the annual commemorations of that march.

I actually come from a very humble home and I think fighting against injustice came naturally to me. My mother was a very kind and compassionate woman. My father was a little bit of a rebel. He used to take up issues in the community and wrote letters for them and takes their cases to the administration in Port Elizabeth.

Growing up in that household, always seeing my mother doing good and being compassionate to the semi-literate people that used to come to see my father, this is where my real background comes from, then working in the factory and then later belonging to and being the executive member of the trade union. During my youth years in the factories in the trade union movement, I was a member of the forerunner of Cosatu and I realise that leaderships pick you out.

I didn’t finish my high school education; I only finished later in life when I had already started working. There was always that thing hankering that there is something unfinished. When you have been exposed to a society with educated people, you feel limited as you see the things they do. That hankering was eating me but later on I went to a college and I am qualified in teacher training in administration and civil service.

Those days the coloured people weren’t very organised and we had to start organising in Cape Town, PE and other places. Here in Johannesburg, it was easier because people were exposed and they knew a little bit better.

That is how my life has been. Going into exile, carrying on with the struggle and coming back home.

My joy and admiration for young people is seeing how far women have come. My heartache is seeing how the work we have done is almost in vain, which makes me think “Is this what we stood for and what people sacrificed for?”

I don’t like to draw attention to myself; I also speak in general for the other women who are not here, those who have laid to rest and had made great sacrifices. I become their voice and tell them they must carry on because Ruth First, Helen Joseph, Rahima Moosa are all happy and smiling at them, looking down at their work and how you became what you are.

It is said that you can become anything that you want to be and it’s true. I say you can reach out, there is a sky and it is said that the sky is the limit, but for me you can go beyond the skies now. So much has been achieved on your behalf. You can reach beyond the sky and become what you want. We have handed the baton over to you – just go forward and help others.