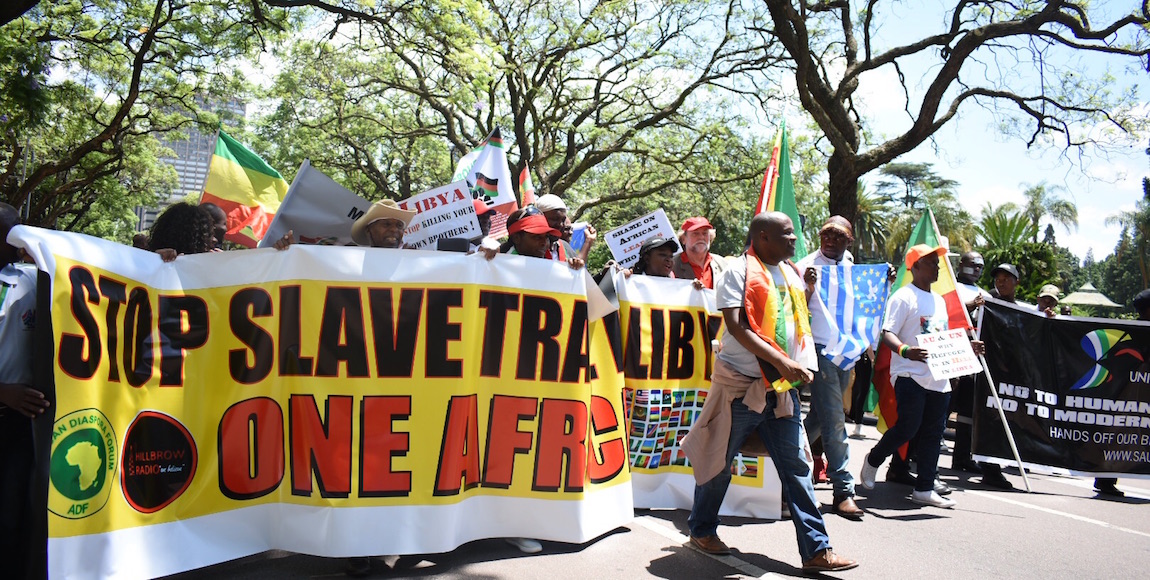 On Tuesday, Africans from across the continent gathered in Pretoria to march to the Union Buildings calling for action against the slave trade in Libya. Flags and supporters from Democratic Republic of Congo, Ethiopia, Ghana, Nigeria, Malawi, Botswana and other African states coloured the Pretoria streets with a sense of African pride and unity. But resounding in its absence was South Africa.

The lack of South African support for fellow Africans was distinct, and plays into legacies of perceived South African exceptionalism. Zwelinzima Vavi, secretary-general of South African Federation of Trade Unions (Saftu) said part of the reason for the lack of support was that many South Africans failed to recognise the plight of Africans on the rest of the continent.

â€œSouth Africa has been a major recipient of international solidarity and yet we still donâ€™t have a high enough conscience to understand that we cannot be indifferent when other human beings go through the hell that people in Libya, the DRC and South Cameroon are going through,â€ said Vavi. The march set off from Burgers Park, Pretoria Central. People arrived with flags and clothing displaying their countries of birth – most prominent were Pan-African and Ambazonian flags.
The space was saturated with Pan-African solidarity, but also a sense of outrage at African leaders for allowing their own to be sold as commodities. The Libyan government, and Africans of Arab descent in particular, came under fire.

â€œThe hatred towards black people has always been there in North Africa. The outrage has exposed it. A few months back we heard in Algeria they didnâ€™t like that Algerians and black people took the same busses. Libya is just a microcosm of this hatred,â€ said Prince Abenge, the secretary general of the African Diaspora Forum (ADF). Many marchers said that the root cause of the situation in Libya was a direct result of foreign imperialistic powers intervening in Africa.

Dr Julianne Kanku Katombe, a representative of the Congolese community in South Africa said that it was clear that US intervention in Libya left a leadership vacuum in the region. Last year former US president, Barack Obama, said that his â€œgreatest mistakeâ€ was not foreseeing the instability would result from US intervention in Libya. Katombe said that such interference marked African history – that Africaâ€™s borders were created by imperialists to leave Africans divided in the face of exploitation of Africaâ€™s natural resources and human capital. “Why is there crisis in Libya today? Libya was a prosperous nation. Everything was free. Who was it that convinced the people to stand against their leader? I still remember Gaddafi spoke, Gaddafi told his people ‘Don’t trust these people, they are lying to you. This country was a desert – I turned it into a forest where anything can grow. Thatâ€™s why theyâ€™ll kill me’,” Katombe told the Daily Vox.

“We know that Europe & US are the root cause of this. They destabilise, divide Africa for resources. We used to be one nation!” #SlaveTrade pic.twitter.com/c7cbU0rDtW

The march to the Union Buildings proceeded without incident. Chants of â€œRise Africa riseâ€, â€œWe are not for saleâ€ and â€œShame on you African leadersâ€ echoed through Pretoria Central as the South African Police Service escorted the procession. A memorandum compiled by the ADF was delivered to a presidential representative.

The memorandum was addressed to the South African government, African Union (AU), European Union, United Nations, the Pan-African Parliament and the Libyan government. It called for a stronger stance from all parties involved, but also for state bodies to take decisive action to end the trade of African people. Although the march was centred around the slave trade in Libya, it was evident from the marchers that the struggle in Libya was understood as part of a larger context of social, economic and political woes felt by other Africans across the continent. Issues of Western imperialism, corrupt African leaders, frustration at the inadequacy of the African Union and the sense of longing for African unity in order to overcome these challenges were themes that resonated throughout the day.

Addressing the crowd outside the Union Buildings, Vavi noted that the Libyan government needs to be sanctioned until it agreed to remove itself from any involvement with the slave trade. But he noted the importance of realising the other struggles facing Africans today.

â€œThe Western Sahara remains colonised by Morocco as we speak. The people of Southern Cameroon continue to be the victims of the worst kind of atrocities at the hands of the Cameroonian government. People in the DRC are being forced [to be] scattered all around the world. The AU have allowed for that tin-pot dictator to extend his term beyond what their constitution allows for,â€ said Vavi.

He said it was because of these realities that South Africans needed to heed Frantz Fanonâ€™s words to rise to our generational mission and reject imperialism, uncaring governments, dictatorships and social injustice.