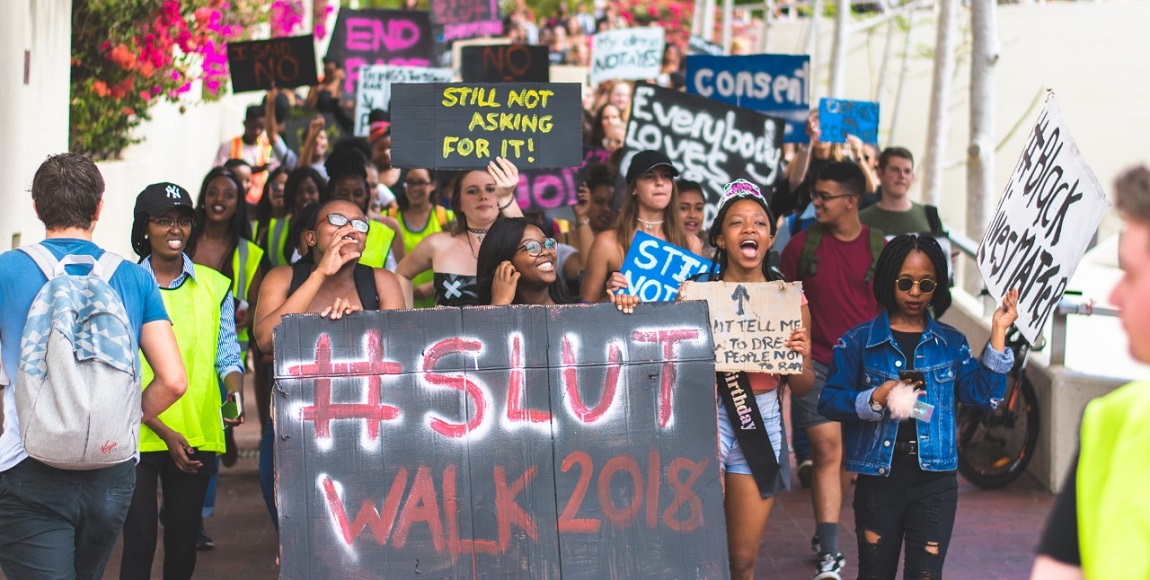 “Show me rape-culture” – this is one of thousands of comments we have heard from students on campus. These comments are quite disheartening when they come from students who are in an institution of higher learning and ought to be critical thinkers. At the same time, this doesn’t alarm me as we live in a society that has normalized the objectification of womxn and perpetuates rape culture. ALUWANI RAMARUMO writes about the importance of the 2018 S.L.U.T Walk held on Thursday 12 April.

Stellenbosch University has witnessed years of student protests against sexual violence and rape culture on campus. In 2016, students took part in end rape culture protests, as reported cases of sexual assault were rapidly increasing. The university set up an end rape culture task team, which was tasked with setting out to examine attitudes, behaviours, and beliefs about gender, violence, power and patriarchy, which in one way or another contribute to the deepening of gender based violence within the campus community. According to the Stellenbosch University end rape culture task team report, rape culture is defined as the set of beliefs, attitudes, and behaviors that are implicated in pervasive gender violence and rape. The report, with recommendations on how to eradicate rape culture on campus, was released in October 2017. Part of the recommendations was to create the portfolio of gender non-violence, which is currently coordinated by Thembelihle Bongwana.

S.L.U.T Walk is a transnational movement of protests calling for the end to rape culture, victim blaming, and slut shaming of sexual assault survivors. S.L.U.T is an acronym for Start Letting US Talk. The protests call out the notion of excusing rape by a womxn’s appearance. These protests began in Canada, after a police officer suggested “women should avoid dressing like sluts” so as to avoid being sexually violated. The 2018 Stellenbosch S.L.U.T Walk is about raising awareness on rape culture, gender based violence and objectification of womxn not only on campus but also in the greater society.

Today, the students of Stellenbosch university came together to remind the campus community about the plight of womxn in society. During the event, Thembelihle Bongwana, the coordinator for gender non-violence, addressed the masses and spoke about the importance of the walk happening during the month of freedom in South Africa. She asked a very pertinent question: “What is freedom without gender equality?” This is a question people seldom ask themselves and hence the importance of the walk in a society where gender inequality prevails.

This walk is a call for all of us to come together in solidarity with the respect and empowerment of womxn. In the context of Stellenbosch University and the country at large, this is a call to create awareness against sexual violence, gender discrimination, and all forms of gender-based violence. It is to ensure that we do not only speak out when incidents occur, but to speak out for the silenced voices, pending cases, and the heightening statistics of gender-based violence in South Africa. As a society, it is our duty to be active citizens and promote gender equality.