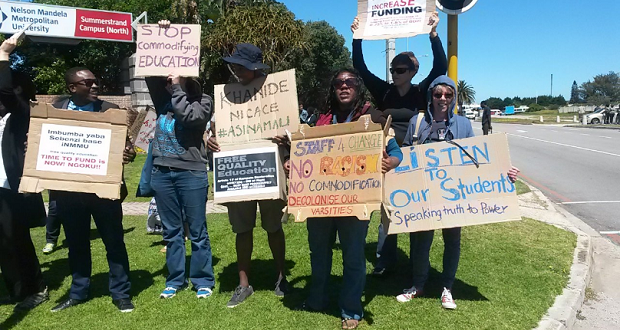 In light of the police brutality that took place on NMMU (Nelson Mandela Metropolitan University) campuses today, this message calls on all staff to reject the militarisation of our campuses and the violence that has ensued as a result.

The Convening Committee of Imbumba had a meeting with management yesterday (17 October 2015). The management team present at the meeting included the Acting Vice Chancellor, the Deputy Vice Chancellors and the Dean of Students and other senior management. The meeting was called by management in response to Imbumbaâ€™s statement of 14 October in which Imbumba expressed concern about the potential militarisation of university campuses and the potential for violence as a result. In this meeting we drew attention to the considerable violence that has followed the deployment of security forces at various campuses nationally.

Whilst we understood the desire to complete the academic year, we expressed our concerns that opening the university through a court interdict would escalate tensions and open the space for police presence on the campus. We were further concerned that the interdict was supported by the Criminal Procedure Amendment Act which has resulted in the militarisation of campuses across the country.

We also indicated that staff would not be willing or prepared to resume their normal functions within an environment framed by police violence, intimidation or the threat of violence. We also expressed that such an environment would hardly be conducive to effective teaching and learning.

The management team was in general supportive of our statement, particularly with respect to the following:
â€¢ The AVC (acting vice chancellor) emphasised NMMUâ€™s commitment to the constitutional right to protest and stated that â€œthe rights of others to protest has always been respectedâ€. This right is confirmed in the universityâ€™s interdict which confirms the right to peaceful protest on the condition that this protest takes place in â€œdesignated areasâ€. She however expressed disappointment that Imbumbaâ€™s statement had not addressed the rights of those who wish to return to class which she argued should be equally respected and protected.

â€¢ The AVC together with the DVCs present confirmed their dislike for militarisation and their commitment to a safe learning and teaching environment.

â€¢ The AVC also confirmed that university staff will not and cannot be expected to work in a militarised environment as the threat of violence is not conducive to teaching or learning.

The management meeting ended with the Imbumba Yabasebenzi restating their commitment to safety of all on campus including both protesting students and students who wish to return to class. Management, in turn, and on the recommendation of Imbumba Yabasebenzi committed to engaging with students to collectively allocate â€œdesignatedâ€ areas for peaceful protest as provided for in the court interdict. Management further committed to communicating with police that peaceful protests were to be allowed on campuses within these “designated” areas.

Students moved from the residences to Mandela Shirt and were dispersed with tear gas, by armed officers approaching on foot with stun guns and by a hippo that circled just in front of the Mandela Shirt space. Students then moved to the front of the Embizweni building. They were told by police that they are to disperse as the Empizweni building is not a â€œdesignatedâ€ place for protest. When asked by members of Imbumba what were the â€œdesignatedâ€ spaces for protest, the police indicated that no such spaces had been provided to them and began to move into formation for attack. After rapid and urgent negotiation between Inbumba members, the police and management, Mandela Shirt was identified as a â€œdesignated spaceâ€. Students were then told to disperse to Mandela Shirt. Students began moving, but some remained behind saying that they were teargassed at Mandela Shirt earlier and felt fearful of going there again. Despite this, some students began moving towards Mandela Shirt. At this point the police were already in formation and after another warning, armed police officers began to move after the students with the water cannon close behind. Within minutes, chaos ensued with the students being teargassed and shot with rubber bullets. It was clear that there was racial profiling by the police with the result that every black student was in danger.

In addition, the police have been targeting prominent individuals within the student movement and selectively arresting them. More students were arrested today.

Against this background, we reaffirm our opposition to the militarisation of our campuses as indicated in our 13 October statementÂ and call on all staff to reject the militarisation of our campuses. Furthermore, we affirm the position that staff will not be willing or prepared to resume functions in an environment that is not free of violence, intimidation or the threat of violence as we believe that this is not conducive to the process of effective learning and teaching and the other functions necessary to the running of the university.

We also want to remind colleagues that the Occupational Health and Safety Act (OHSA) protects workers from working in environments which are physically or psychologically damaging since â€œemployers must make sure that the workplace is safe and healthy, and must not allow any worker to do work that is potentially dangerousâ€.