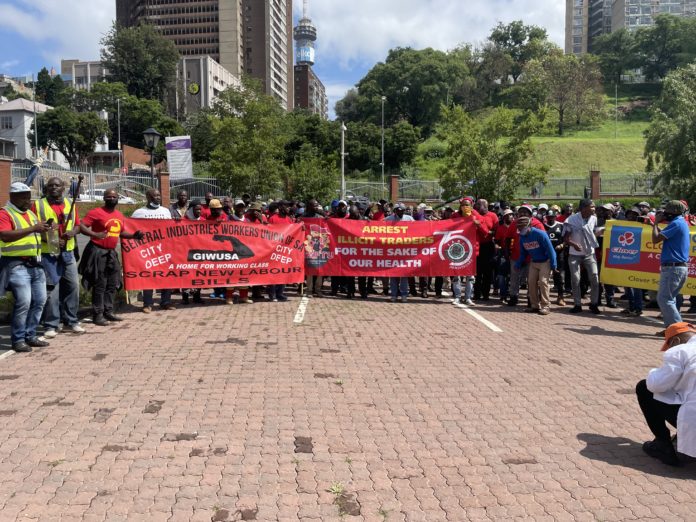 On January 8, there was a mass meeting of workers and members of organisations in solidarity with the Clover strikers in Johannesburg. The meeting’s purpose was to strategise on a way forward and foster solidarity between workers, unions, and Palestine solidarity organisations, HUMAIRAA MAYET reports.

Hundreds of workers gathered in Cathedral Hall in Johannesburg. The workers were from the General Industrial Workers Union of South Africa (GIWUSA), the Food and Allied Workers Union (FAWU), and the South African Federation of Trade Unions (SAFTU). Chanting and singing struggle songs, workers called for an end to the “oppressive tactics” employed by Clover management.

Mametlwe Sebei, president of GIWUSA, echoed the demands of workers and called for an end to the ‘takeover’ of Clover by MILCO. Heads of unions explained the importance of intensifying the strike and not allowing it to lose momentum. All present agreed that it would be critical for the strike to continue as the workers strive for victory.

Also in attendance were several Palestine solidarity organisations, including the SA BDS Coalition and the Palestine Solidarity Alliance (PSA). The organisations affirmed their support for the striking workers and drew parallels between apartheid South Africa and the current Israeli apartheid state.

The Workers and Socialists Party (WASP) was also present at the mass meeting, as was their youth wing, the Socialist Youth Movement (SYM). The former stressed the need to build a sustainable party which has the best interests of the working class at heart. The latter emphasised the similarities between the struggles of students and those of workers, and the need to foster solidarity between the two.

A brief history of the Clover strike

On November 22 2021, thousands of Clover workers went on strike. The strike aimed to bring to the attention of Clover’s management the numerous issues affecting workers on a daily basis. These ranged from wide-scale retrenchments to salary reductions and difficult working conditions. The striking workers are calling for the nationalisation of Clover.

Over and above the company being riddled with corruption and mismanagement, Clover was acquired by MILCO, an Israeli-based company. MILCO is a consortium of the Central Bottling Company (CBC) in Israel. In their calls for nationalisation, workers have demanded an end to the Clover/MILCO merger. They have reiterated that the company must be entirely owned by South African entities.

Over and above being complicit in apartheid in occupied Palestine, MILCO has now turned its attention to oppressing South African workers, workers said.

The mass meeting ended on an enthusiastic note, with workers determined to have their four key demands met:

Striking workers called on all South Africans to stand in solidarity with them by donating to their cause and boycotting all Clover products.