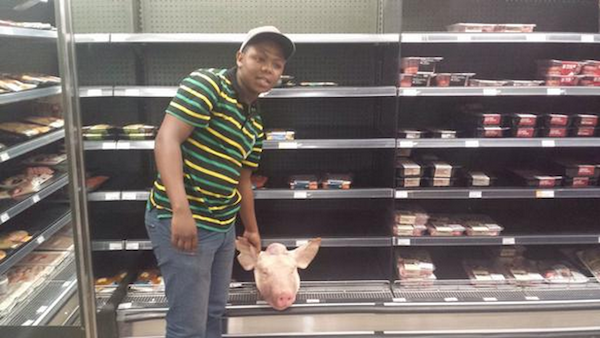 Cosas has expressed its intention to continue with its controversial “pigs campaign” which involves placing severed pigs heads in the kosher and halal sections of Woolworths food markets. The aim of the campaign is to discourage people from eating food Cosas says is tainted by Woolworths’s continued support of Israel.

A statement issued on Thursday by Siphakamise Ngxowa, Cosas Western Cape chairperson, and Siphelo Makeleni, Western Cape secretary, said: “Cosas will implement our campaign to bring Woolworths the pigs and if the pigs campaign is unsuccessful, we will consider more radical and militant actions to ensure that Woolworths learns to be humble towards the masses and our demands.”

The statement is the second communique to be released by Cosas after the organisation first launched their “pigs campaign” in stores on October 24.

Over the weekend, at leastÂ 40 activists were arrested following a flash protest at a Woolworths store in Killarney Mall, Johannesburg.

Police said they had created a public disturbance. A handful of protestors outside the Woolworths in Lakeside, Cape Town, were also allegedly ejected by police on Thursday.

Woolworths saysÂ that less than 1% of its food products are sourced from Israel.

Cosas said it had received many messages of support for its decision to place severed pigs heads in stores around the country from both Jewish and Muslim people.

“There is already a donation for the next ten pigs heads,” Cosas said, adding that the donor, a Jewish person, wished to remain anonymous.

The organization is set to hold a press conference on the street outside Woolworths headquarters in Cape Town, complete with severed pigs heads.

Responding to criticism that their campaign was offensive to both Jews and Christians, Cosas said cynics “should explain why they are not insulted by the murder of Palestinian children”.

“There is no pigs’ head scandal, the scandal is the pigs that head Woolworths and continue to support Apartheid Israel.

“Cosas is not a clown organization, we are a very serious powerful group of young people,” the organization said.

The pigs campaign is not supported, endorsed or encouraged by the South African Boycott Divestment and Sanctions campaign (BDS). However, BDS shared the latest Cosas statement on twitter and their facebook page, resulting in some confusion among BDS supporters, with some asking the campaign for further clarification of their stance.

* Editor’s note:Â The Daily Vox is opposed to the occupation of Palestine but also believes that little piggies should stay out of the market. Â Tensions are currently flaring in Palestine over the past few days after Israeli authorities closed the Al-Aqsa mosque complex in a move Mahmoud Abbas called “an act of war”.Â