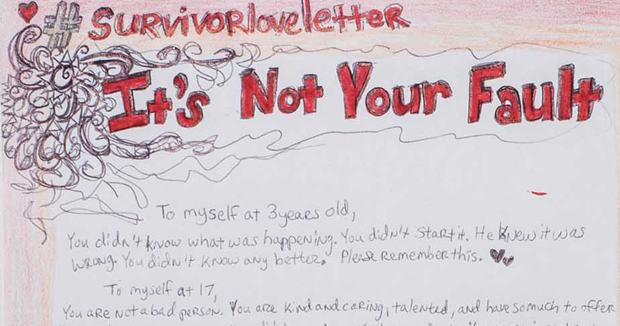 In one small corner of the internet, a Tumblr blog is helping survivors ofÂ sexual assault to declare their love for themselves, in letters written to themselves.Â

Filmmaker and media activist Tani Ikeda launched Survivor Love Letter as a reminderÂ that the trauma of sexual abuse doesnâ€™t stop with the abuse, and a fewÂ words can go a long way towards healing.

Valentineâ€™s Day may bring love and cuddles to many people around the world, but IkedaÂ started the #survivorloveletter blog on the day of love, because not everyoneÂ carries the same warm memories. â€œFor many of us, Valentineâ€™s Day is an anniversary of violence,â€ Ikeda writes inÂ the first post of the blog. â€œBy telling our stories we seek to build knowledge andÂ reflect on the ways we heal ourselves and our communities.â€

The site is still small, but with each new letter its community is slowly growing.Â Every love letter is different. There are some written as poems, others scatteredÂ with drawings of hearts, and some typed in simple plain text. The site gives roomÂ for survivors to pen letters to themselves, or for family and friends to write toÂ the people they know who have been hurt. Many of the love letters are fromÂ survivors writing to their younger selves. Ikedaâ€™s own personal experiences have played a role in the siteâ€™s developmentÂ and helped her to create her own survivor love letter.

â€œAfter surviving my rape I spent 10 more years surviving chronic depression andÂ a perpetual feeling that I had to continue to fight for my life. This is my survivorÂ love letter. Don’t give up on your own happiness,â€ IkedaÂ told Mic.