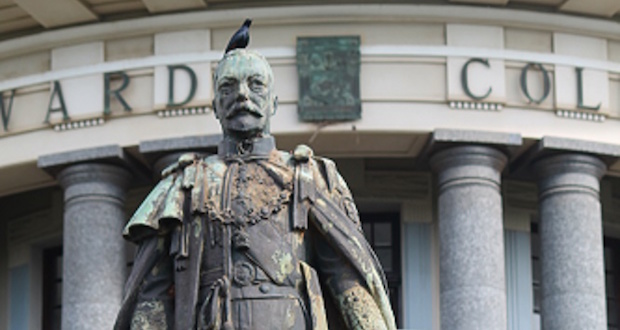 After three weeks of student protests, the University of Cape Town (UCT) senate has approved the removal of a statue of Cecil John Rhodes from campus, although the decision will be final only when the university Council meets in mid-April. Students want the statue removed because it symbolises a lack of transformation at UCT. The DAILY VOX TEAM visited the University of KwaZulu-Natalâ€™s Howard College to find out what students there think about transformation and the statue of King George V, ruler of the empire that colonised South Africa, which still stands tall on their campus. Nutan Gokul, 23, third-year student, Asherville
Our history does play a role in society because if it wasnâ€™t for history we wouldnâ€™t be this wonderful country we are today. We had to go through the struggle to have the opportunities we have. We should be looking at this from a positive perspective â€“ even though the statue portrays negativity, like oppression. The constant reminder of oppression and South Africaâ€™s struggle should stand to empower us. By all means we came out victorious and stronger so Iâ€™m totally against removal of statues. I donâ€™t think erasing visual history will be any good for honouring South Africaâ€™s legacy, tenacity and potential, for the history of Durban and South Africa. Sithembile Mahaye, 18, first-year student, Durban CBD
The statue represents colonisation and apartheid, all the bad things white people did to black people. Iâ€™d prefer if it were not here but it really doesnâ€™t make a difference because what this guy stood for is long gone. We are not a colony now and apartheid has been over for two decades. I havenâ€™t experienced any racism at UKZN. I would like more statues of our struggle heroes though, because that symbolises what we went through and what we stand for as a country. King George does not symbolise that. There are African academics and they are good at their jobs; even postgraduate students are encouraged to get into academics so we have a variety of ages and races there. Also, every student here has to take an isiZulu module as part of their degree â€“ that just goes to show how the university is committed to being racially tolerant. Michael Renton, 19, 2nd-year student, Sydenham
I donâ€™t know anything about this man and the statue here doesnâ€™t affect me at all. It was here before I was here so who am I to say it should go or not. I wouldnâ€™t say it adds any value to the institution because it being here doesnâ€™t have any worth for academics, which is why we are all here, or how black people are treated at the institution. The statue is part of our history and if it means we are honouring colonisers, then so be it. If it made people racist or brought back apartheid then I would certainly care. Right now, itâ€™s just a monument that represents our history and we canâ€™t run away from where we come from. There is balance in terms of race in my department so maybe if we had a problems of black people not being represented in academics, we could have a conversation about that, not a statue that I donâ€™t even care about. Cindy van Wyk, third-year student, the Bluff
I donâ€™t attach much value to the statue; it means nothing to me. Itâ€™s just part of the history of the university. I would want it there just because it represents the history of UKZN, where it came from, where it originated. Iâ€™m all for the new South Africa but why not have part of our history with us? It just shows the movement of time, that we have changed from where we were. Thatâ€™s why the statue is there â€“ it reminds us what happened. The institution is pro-transformation and racial tolerance because we have racial diversity of academics and racism is not tolerated. We learn isiZulu and modules from other cultures to make us more aware of other ways of life and to remove ignorance. That is progress towards a racism-free South Africa. Kwenza Dlamini, 18, first-year student, South Beach
I donâ€™t have a problem with the statue. I donâ€™t care if itâ€™s here or not, but I wouldnâ€™t have a problem with it being removed. All colonisers played a role in the history of how South African blacks were treated, but I seriously donâ€™t care if we have statues of them or not. I donâ€™t even know the history of this guy. His statue doesnâ€™t affect me. I have one black lecturer and one Indian â€“ the rest are white. The majority of academics are white; itâ€™s not a strong mix. I think there is an issue that needs to be addressed there, but the statue being here or not doesnâ€™t make a difference in my life or affect my presence at the university in any way. I didnâ€™t even notice or pay attention to it before today.

– Voxes have been edited for brevity and clarity.
– All words and images by Zimasa Matiwane and Qiniso Mbili.