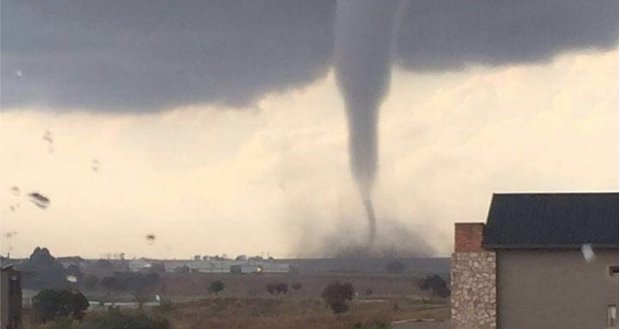 At least 20 people are said to have been injured after a tornado ripped through Tembisa, in the north east of Johannesburg on Tuesday evening. According to journalists reporting from the Pumulani Plaza complex in Tembisa, which sustained heavy damage, a substantial search and rescue mission is underway in the areas, as reports emerge of caved in roofs and destroyed shacks.

Yes, there was a TORNADO spotted in Johannesburg. Donâ€™t believe us? Just watch these.

But I also saw a video of a tornado in Magaliesburg, when did that happen?

The first tornado was spotted in Magaliesburg, on Monday afternoon, yes that one was real.

On Tuesday afternoon a second one hit the East Rand touching down on the R21, just north-east of OR Tambo, and also hitting Phumulani Mall, in Tembisa.

#Tornado and hail spotted near the OR Tambo International Airport by Evan Baillie. KS pic.twitter.com/dm0WxMC2qx

Do we know how much damage the tornado caused in Jozi today?

Quite a bit of property was damaged when the tornado hit the East Rand. In Phumulani Mall, Tembisa, it ripped the roof off the building and caused structural damage. Â A number of shacks and homes have also been destroyed in the area. On Wednesday morning the Ekurhuleni Mayor confirmed that the number of homesÂ destroyed was 120. 400 people were also left homeless in Tembisa.Â

It also affected the Tembisa Tertiary Hospital where it destroyed three ambulances, the hospitalâ€™s fence, carports, the roof of one building and 20 vehicles that belonged to hospital employees.

But was anyone seriously injured?

So far about 20 people were injured in Tembisa. ER24’s Werner Vermaak said that people managed to escape with minor injuries from the Phumulani Mall and were being treated at Tembisa Tertiary Hospital. Fire and rescue teams did a full search of the mall and have not found anyone else that may have been injured.