Home Photo Essays The baker of Doha: keeping tradition alive in back streets of the...
WhatsApp
Facebook
Twitter
Email
Print 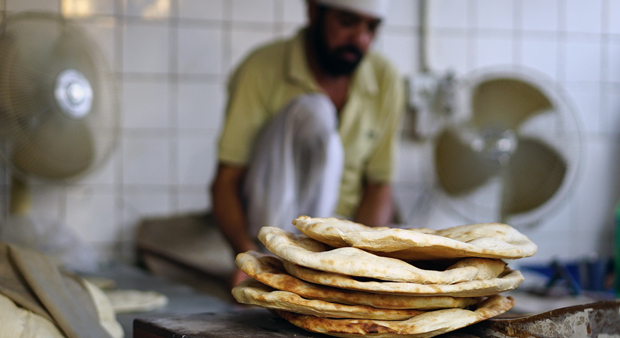 Doha is a city of the future, but if you trawl the back streets, you can still find small businesses that have been plying their trade for decades. SORIN FURCOI explores the old-city spirit of Sayedâ€™s bakery, which has been providing its loyal clients with their daily bread for 20 years â€“ and is still going strong.

Qatar has grown exponentially over the past decade. Doha, its capital, is now a forceful economy, with high-rise buildings peppering the skyline. The transformation of the city has been nothing short of phenomenal.

The booming economy has sent property prices skyrocketing, turning the city into a real-estate paradise, as big players seek to cash in.

While big business has benefited, smaller, traditional corner shops and neighbourhood stores have been forced to shut down to make way for the new. The cityâ€™s face is changing. Fast.

But some remain, stubbornly fighting on against the machine of rampant commercialisation.

In the back streets of Doha, you can find them. The colourful characters and their stories. A Doha from another time persists.

Some of their doors have shut shut to make place for modern buildings that house the future of Qatarâ€™s small and medium businesses; but others have managed to still keep their place on Dohaâ€™s back streets and in the daily life of their loyal clients. Qatar,Â the richest country in the world, has been developing at a rapid pace over the last 10 years. While many old neighborhoods were demolished to make space for futuristic skyscrapers, some streets in the heart of Doha have managed to remain almost unchanged. Some businesses escaped the wave of modernism, and continue to function as have done for decades. Sayed, 40, opened his bakery on one of Dohaâ€™s back streets almost 20 years ago. He learned the secrets of making bread when he was a teenager in Pakistan. Sayed says he has never wanted to open a bigger bakery. â€œBusiness is good here and I make enough for me and my family back home.â€ Sayed has seven children and they are a â€œgood mixâ€ (of boys and girls). He is not thinking of retirement yet as he still needs â€œto get some of them married soonâ€. â€œThe bread is the same as Pakistani breadâ€ says Sayed. He has never changed the recipe he learned from his â€œustadâ€ (teacher) many years ago. The customers vary from expat laborers and executives to Qatari nationals and restaurants in the area. The bakery operates with only three workers, including Sayed, and at the same location since the day it opened its doors.