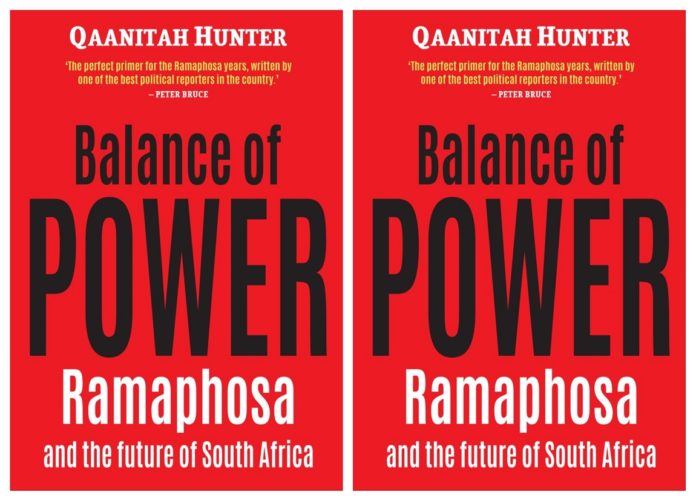 Political journalist Qaanitah Hunter’s latest book Balance of Power: Ramaphosa and the future of South Africa shares fresh insights into Jacob Zuma’s removal as president and Cyril Ramaphosa’s ascendency into the presidency. Hunter’s book contextualise what the current political climate could mean for both the ruling African National Congress (ANC) and the future of South Africa. In this extract, she details what happened after Ramaphosa won the ANC presidency.

The day after Ramaphosa won the ANC presidency, two of his most ardent supporters went for lunch on the famous Vilakazi Street, Soweto. Ngoako Ramatlhodi and Tito Mboweni shared a meal as they discussed what the outcomes of the Nasrec conference meant for Ramaphosa.

Ace Magashule’s election as ANC secretary-general caused the most alarm, and the two were convinced that Ramaphosa’s presidency would be undermined from within the party. Ramatlhodi, who was fired as a minister by Zuma and has since testified before the Zondo commission of inquiry, said they realised Ramaphosa had to be supported. ‘I was one of those who pushed for former President Mbeki to be removed. I know what it takes to remove a president. So I said we must go to Luthuli House to support the president otherwise . . .’ he later told me.

While Ramaphosa preached unity to anyone who would listen, those around him were suspicious of the die-hard Zuma loyalists who had made it back into the party’s leadership. A month after the conference, Magashule was reported to have said to his supporters in KwaZulu-Natal that the new leadership arrangement was ‘only a matter of five years’. In essence, what he meant was that Ramaphosa would be out of power by the next ANC conference.

What was truly at play only became evident when police minister Bheki Cele hit back at Magashule. ‘You can’t be SG [secretary-general] and go to a platform and say that people who have been elected will be there for five years. You need to tell us who are you working for. It’s not even two months [since we were elected] and you are already giving us five years. You can’t do that without being sent by someone who sent you to destroy the ANC.’ Cele, known for his ‘cowboy’ ways, claimed that Magashule had been sent by the notorious Gupta brothers to destroy the party from within, and responded in this way: ‘We promise that five years is going to finish and if there is someone who has to leave‚ it’s you.’

I asked Ramaphosa a few months after he assumed office why he didn’t take a more firm stance against his political detractors in the party. He replied: ‘I am the president of the ANC, I am not the dictator of the ANC.’ But Ramaphosa knew that his staying power as president was only as strong as the power he held in Luthuli House, the ANC headquarters. That is why he made the decision not to deploy Fikile Mbalula as a minister and instead sent him full-time to Luthuli House as head of elections. Zizi Kodwa went there too as head of the ANC presidency, while Ramatlhodi became an adviser of sorts in the party.

The clashes between Magashule with his bloc of supporters and Ramaphosa and his allies were at first minor skirmishes and it appeared almost as if the party was on its way to recovery. There was an attempt by the Zuma faction to regroup around the former president’s court appearances on eighteen charges of fraud, corruption, and racketeering but it proved mostly unsuccessful. It was clear from the first time his supporters mobilised people outside the Durban High Court that Zuma’s popularity was on the decline. His most ardent lieutenants were all somehow linked to the Guptas and state capture or facing their own accusations of corruption. A known fraudster, Carl Niehaus, seemed to be co-ordinating the fightback on all sides. (Incidentally, he was later employed by Magashule to work in his Luthuli House office.)

For much of 2018, there were constant rumours of a Zuma fightback but it only revealed itself in his threatening to make disclosures that would implicate or embarrass his opponents. ‘I want to warn all of them, all of them. In the past few years, they have dragged my name through the mud. Some of them say Zuma is corrupt but they can’t tell me what I have done that makes me corrupt. I know some of them who say this about me, they are also corrupt – I will spill the beans on them,’ Zuma said in Durban in June. But Ramaphosa’s allies rubbished this and other threats and accused Zuma of ‘always crying wolf’. ‘If there were files to share, he would have long shared it,’ a cabinet minister said to me.

But as Ramaphoria peaked in 2018, it emerged that Zuma and Magashule were at the centre of an organised political fightback. Around mid-morning on 6 September 2018, I was sent a photo of Zuma dressed in a coat with a stack of documents in his left hand speaking to two men while a woman in a pink T-shirt stood behind him. I immediately recognised the people in the picture.

One was ANC secretary-general Ace Magashule wearing a dark blue shirt while looking down at his phone as the former president appeared to be speaking to him. Next to him was the recently dismissed leader of the ANC in the North West, Supra Mahumapelo. And at the edge of the photo, wearing glasses and dressed in a pink T-shirt and jacket, was, I soon figured out, the secretary-general of the ANC Women’s League, Meokgo Matuba. Why were the four of them meeting at a Durban hotel? It seemed a bit odd so I set out to discover what had gone on.

The first step was to get information from within the hotel, to confirm whether Zuma was still there. It turned out that the meeting was still continuing, past midday, on the second floor of the Maharani. According to sources in Luthuli House, Magashule’s diary said he would be in Bloemfontein that day. Later, when my colleague Jeff Wicks went to the hotel to doorstop them, they denied meeting with Zuma.

It turned out that senior ANC leaders were aware that a series of meetings was taking place in an effort to ‘plot a fightback’ against incumbent president Cyril Ramaphosa. By the time the front page of the Sunday Times was sent to print with the headline ‘Exposed: Zuma plot to oust Cyril’, we had spoken to dozens of ANC leaders, some very senior in the organisation, who confirmed that they knew about the meeting. Some went further, explaining what was going on.

‘Top ANC figures, including former president Jacob Zuma, are plotting in secret to unseat President Cyril Ramaphosa,’ our report read. This bold statement was backed up by a series of conversations with senior ANC leaders, Luthuli House insiders and even people lower down the political chain. ‘The Sunday Times can reveal exclusively today that Zuma held a clandestine meeting with staunch backers including ANC secretary-general Ace Magashule, former North West premier Supra Mahumapelo, ANC Women’s League secretary-general Meokgo Matuba and ANC Youth League KwaZulu-Natal secretary Thanduxolo Sabelo, at the Maharani hotel in Durban on Thursday,’ our report stated. It went on to note that this meeting had been preceded by another meeting at the Beverly Hills Hotel in Umhlanga Rocks the day before, attended by Magashule and former South African Airways board chair Dudu Myeni.

What this meeting revealed was that there was a co-ordinated fightback against Ramaphosa’s incumbency, led by a top party leader, Magashule, in cahoots with Zuma. At the centre was Dudu Myeni, who played the role of organiser, calling meetings and coordinating efforts. The Maharani meeting was not simply a caucus of friends within a faction of the party. It was a high-stakes meeting that was meant to strike at Ramaphosa and his supporters. It was one of the Zuma camp’s last cards left to play.