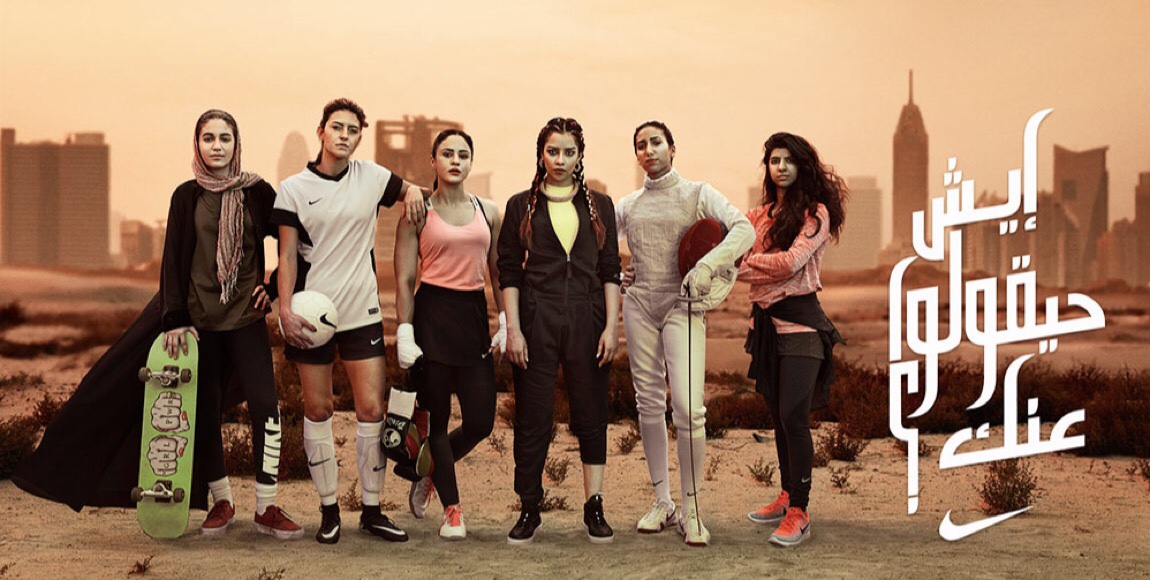 Nike recently launched a video showcasing the many talents of female Arab athletes doing their thing, accompanied by the tagline â€œWhat will they say about you?â€. Itâ€™s a great campaign no doubt, and definitely sends out a strong message about womenâ€™s empowerment, especially in contexts where they remain marginalised and they are constantly held back from partaking in a lot of things, and especially sport.

I was so excited to share it, and for me – as a Muslim woman who loves both Nike and being active – it was great to see people who look somewhat like me doing their thing, unapologetically. I noticed that many of the women in my social media networks felt the same way, excitedly sharing the video.

Nike gave Muslim women such a beautiful platform with this ad ðŸ‘ŒðŸ½ pic.twitter.com/HL9JRAZceA

Thereâ€™s also the fact that all of the women featured in the video are strong in every sense of the word, and accomplished athletes from all over the Arab Region; in it, we see parkour trainer Amal Mourad (UAE), ice-skater Zahra Lari (UAE), pop singer Balquees Fathi (UAE/Saudi), fencer InÃ¨s Boubakri (Tunisia), and boxer Arifa Bseiso (Jordanian). The narrator is Fatima Al-Banawi, a Saudi social researcher, artist and actress.

Be somebody nobody thought you could be. ðŸ’«

But as great as it is, that doesnâ€™t mean that there arenâ€™t a few issues with it, hidden in the subtext.

And these issues deserve to be talked about. The ad is great for what it is. But at the same time that it challenges normative narratives, it also reinforces them.

Where are the black Muslim women in this ad? If you want to be culture-specific and say the market for this ad is Nike Middle East, fair enough – but there are black Arabs, so where are the Yemeni or Sudanese girls? American fencer Ibtihaj Muhammed was lauded for being the first American Olympian to partake in the Games, headscarf-clad – so in a campaign like this, where are the girls who look like her? I’m not Arab, but I have a relatively similar skintone to the girls in the video, which made it a bit more relatable for me. But Arab and Muslim spaces generally already have issues when it comes to being exclusionary of black Muslims – perhaps if they really wanted to challenge stereotypes, including black Muslim voices would be a good starting point.

The ethical issues around who makes the products

Nike has always been shrouded in controversy because of its use of sweatshops and child labour. At a Nike footwear factory in Jakarta in Muslim-majority Indonesia, a supervisor ordered six female workers to stand in the blazing sun after they failed to meet their target of completing 60 dozen pairs of shoes on time.

In another incident in Indonesia, 56 women were allegedly forced to run in the hot sun for wearing “nonregulation shoes”, until 12 of them were hospitalised.

Where are the wrestlers in this ad? Or, for that matter, any of the girls who don’t necessarily have slimmer bodies, but love to be active either way? Because I can tell you right now, they definitely exist.

The idea that all Muslims are Arab, and vice-versa, is already a really damaging one that is very widespread. Taking this a step further, purporting this image that all Arab/Muslim women are brown and slim is grossly incorrect – there is so much multiplicity to the Muslim, Arab, and Arab-Muslim woman. And although Nike doesnâ€™t openly state that it is trying to disrupt narratives of Muslim or Arab women, itâ€™s impossible to ignore the way that it uses these discourses and ideas to put across its message, and ultimately sell its product.

Again, I think the ad is great. It sends an important message about empowerment and about Muslim women being able to challenge norms and, and inspiring young girls to show them what’s possible – and besides just the Muslim aspect, it shows that women can be strong, and active, and happy, and prosper in the way that they keep fit. But at the same time, letâ€™s not lose focus – as much as we can enjoy things, letâ€™s still exercise our agency to be critical.