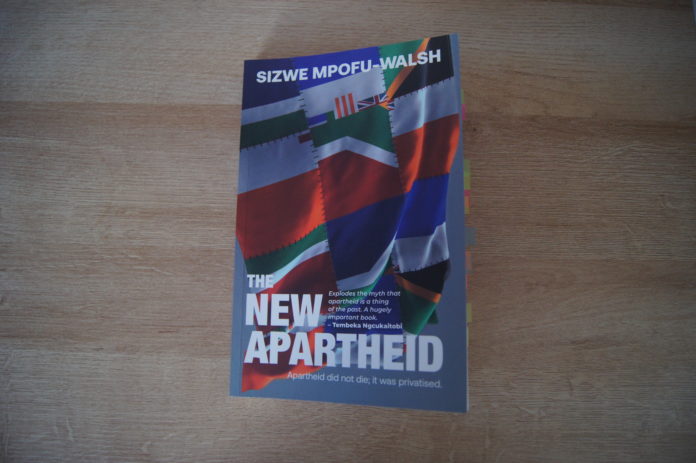 In Dr. Sizwe Mpofu-Walsh’s second book The New Apartheid, he examines how apartheid has reinvented itself. This book follows his first, Democracy and Delusion. Both books examine the intersection between the past and present and how they aren’t that far apart. The New Apartheid takes it a little further.

Reading The New Apartheid just weeks after the July unrest and violence felt more than a little jarring. There was no predicting the unrest (unless of course you are a government official with intelligence). But the book provides interesting insights into the unrest. Mpofu-Walsh said after people read the book, they will be able to make the connection between the unrest and the book’s material.

There isn’t a single person who witnessed what happened even if they weren’t personally affected, that wouldn’t be able to realise that something is fundamentally broken.

The book addresses many different and far-ranging issues and themes. However, the overall idea that Mpofu-Walsh sets out is that “Apartheid did not die; it was privatised.” He told The Daily Vox that while this line wasn’t in his first book, it emerged from the book events for the first book.

“I always had a nagging sense that a book could be written that wasn’t necessarily about current events […] but was a layer deeper which reflected on the fundamental crisis that confronts South Africa right now,” said Mpofu-Walsh.

“Apartheid feels like so much a part of our lives but it’s suppressed to such an extent that it’s almost become a stylised thing that we don’t look at it in its full depth,” said Mpofu-Walsh.

During his research, Mpofu-Walsh read extensively about the architects and thinkers of apartheid. While this would no doubt be troubling on its own, he also came to realise how deeply apartheid still permeates South Africa today. In trying to define the problem, he came to term it “The New Apartheid”.

Over the course of the book, Mpofu-Walsh unpacks how he arrived at the thesis using themes. The themes are chapters on space, law, wealth, technology, and punishment.  While reading the book, there was one line that stood out. Towards the end, he writes that apartheid was the denial of collective bereavement that is so central to human emotional survival.

“To live in South Africa is to be walking among living ruins.”

It is this line that encapsulates the message of the book. There has been no reckoning with apartheid as it is historically defined. Thus, it has led to the current social, political and economic state of South Africa in 2021. As Mpofu-Walsh himself said the book is not a current affairs book. It is instead a reflection of what is at the root at the problem of South Africa.

That’s particularly the reason why Mpofu-Walsh said during the interview that the book is aimed at a future reader. “The aim of writing this book is that I wanted it to live for a very long time. I was writing for someone in the future who wanted to know what was happening in the present – our present […] What would someone in the future who is not linked to our society – what would they think? Am I telling the truth to them?” said Mpofu-Walsh.

If nothing else, this book is a necessary undertaking to shatter any final vestiges of rainbowism, South African exceptionalism and the myth that apartheid ended in 1994.

“We need to puncture again this story that we tell ourselves about South Africa and start actually seeing what is happening in South Africa. This book is an attempt to puncture that story […] After you read this book, you can’t see South Africa the same way,” said Mpofu-Walsh. “We can’t imagine something better than this if we think that this is the best thing there is.”

This book is no doubt a very important addition to the South African literary space. As the country continues to grapple with the pandemic, the unrest., our history and the infinite problems, there is no time like the present to stop and reflect.

Of course, the book goes a little further than just reflection and understanding. Mpofu-Walsh sets out ideas and proposals to address the issues and themes he raises.

During the interview, Mpofu-Walsh said if there’s one thing he could do immediately, it would be to call a convention. “It would be very similar to the convention called in the 80s and 90s. But this time we learn the lessons not just from apartheid but also from the last three decades. Then we start from scratch. […] We should keep the parts of the constitutional democracy that have advanced us since 1994 but we should be prepared to uproot the paths that don’t,” he said.

Ziyanda Stuurman asks: “Can we be safe?” and “how” in new book

The only barrier people might experience while reading this book is the academic nature of the book. There are likely not many ways to present the themes and ideas from the book in a way that is not academic in nature. But as South Africa grapples with this moment – the past and present and future – this is also something that will need to be understood. Creating ideas and knowledge that reaches people with an understanding of their particular contexts. More than that, how do the ideas being presented and shared by many writers and thinkers about creating a different South Africa enter into the wider, popular discourse.

To address this in part, Mpofu-Walsh has put together a video which makes the book and its ideas more accessible.

Published by Tafelberg, the book is available at all good bookstores and online.