Home COVID-19 The SAPS is too caught up in its own contradictions to be...
WhatsApp
Facebook
Twitter
Email
Print 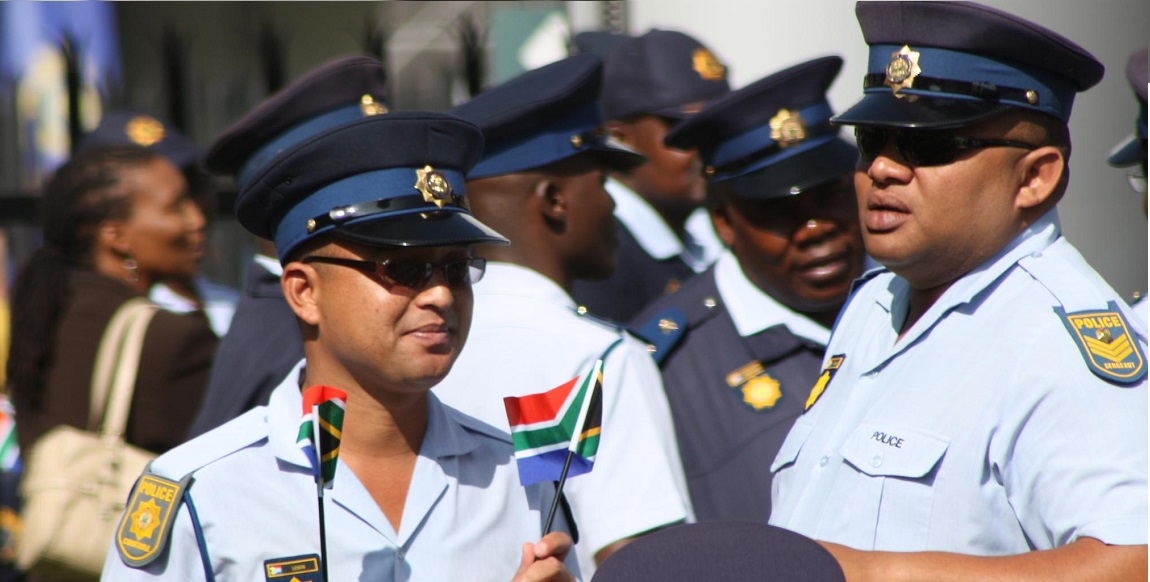 The lockdown protests in Cape Town offered us many laughs but it also showed that the police do know how to approach protests with a softly, softly approach. They just choose not to offer that approach when the protesters are black and poor. By Ling Shepherd

South Africa is not unique in distrust of a police force. It is, in my humble opinion, meritorious to regard the police with some suspicion –  especially with all the brutality associated with them. Apartheid police were particularly insidious as they did not restore law and order, but rather brutalised protesters fighting for human rights.

Our country’s freedom was built on protest, and the lockdown has seen some bizarre ones. Just a couple of weeks ago  people were protesting to have beaches reopened. Now we know the closure of beaches and facilities was to prevent the congregation of large crowds, these are the types of things that result in what we know now to be super-spreader events. But how did the police respond?

A few weeks ago SAPS was called to intervene with crowd control at a SASSA Office. Police used water cannons to enforce Covid-19 regulations at the SASSA office in Bellville in Cape Town. It was chaotic as hundreds turned up in the rain to collect their grant money. As you can tell from the testimonials here many people need these grants as it is their only source of income.

In early February a protest took place on Muizenberg beach in Cape Town. This video shows how SAPS handled a situation to get someone to leave the beach. Police confiscated his belongings to coax him out of the water.

He demanded that it be returned, he was handed back his belongings and the police walked off and away from him. No excessive words, no raised voices, no arrest.  Over here SAPS seems to even be confused as to how to remove people from the beach. We can hear a police officer saying “stop the people” but that’s about it. Folks are taking off their flip flops and walking toward the water. There are no forceful removals and no water cannons.

Every organisation, especially government structures has a code of conduct. This one belongs to SAPS. This one is particularly striking and ironic. “In order to achieve a safe and secure environment for all the people of South Africa we undertake to: act impartially, courteously, honestly, respectfully, transparently and in an accountable manner; exercise the powers conferred upon us in a responsible and controlled manner”. For all intents and purposes the main aim of a police force is to de-escalate potentially violent situations; not make it worse. However SAPS displays elitism so glaringly constantly by using excessive force against poor black people – in stark contrast to the restraint and soft spokenness the wealthier among us are offered. One group of people are standing in queues for money to eat their first meal in days. While another is protesting for the right to participate in a leisure activity. We are deep within a pandemic and social distancing measures have to be enforced, and it can be done in a dignified way as we have seen with the beach protests.

The fact is the voiceless and poor are treated as though they have no rights. They do not get understanding, empathy and explanations about the law. And yes, it’s not unique to us. In recent years the rise of the #BlackLivesMatter movement has shone a spotlight on brutality of police forces worldwide. Looking at the core values of any police force it comes down to bringing calm and peace. The capacity and  for this exists, and SAPS should be more cognizant of their actual role in society. We know the world is a place of the haves and have nots but everyone deserves to be treated with respect and dignity- especially poorer and marginalised folks. Our country’s history is defined by force and segregation of races and by extension economic status. SAPS was integral in applying these laws of segregation and discrimination.  SAPS should not be heavy handed and brutal in a post-democratic South Africa. Skin colour and economic status should not be deciding factors in how you treat someone. If it does it makes you morally inept, and we don’t need this from a body that exists to preserve peace.