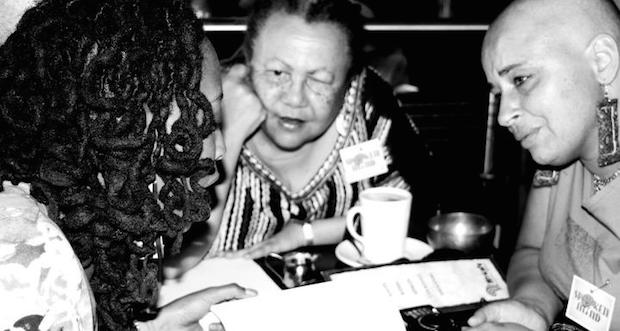 MwB: I understand that you only started writing upon your residence in South Africa, where you became involved in community development activism after having been involved in progressive politics, the women’s movement and the anti-apartheid struggle. What is it about South Africa and your experiences, reflections and engagement with the country that ignited your passion for writing or allowed you to write?

MJ: In the US, I was very much a political activist and was engaged in left/progressive struggles. As leadership in a women’s organisation, my individual work included issues of the black community such as infant mortality, international solidarity with Cuba, Nicaragua, Palestine and South Africa, lesbian rights and reproductive rights in support of access to abortion and against forced sterilisation. I was very busy. But I did not do anything related to culture at all: the most creative thing I did was lead chants, for blocks and blocks, during demonstrations.

When I moved to South Africa in 1993, suddenly I had a lot of time on my hands. I started to explore other interests, beyond the explicitly political. At a monthly gathering of Cosaw (the Congress of South African Writers) Raks Seakhwa, the convener, said, “We’re just writers here, coming together to share our work.” I was shocked, stunned because I hadn’t thought of myself like that. That night, I went home and wrote my first poem, and I continued writing in fits and starts from that time.

So largely it was having the time and space to write (I didn’t know that many people and had less responsibility) that allowed my creativity to come out. The work I was doing at the time allowed me to meet with community projects all across the country, and the beauty of this land, the vibrancy of South Africans, stimulated me to write such poems as “Green” and “That Good Stuff” (Black men in East London). MwB: What is the philosophical and ideological framework within which you locate your engagement with progressive politics, the women’s movement, community development and literary initiatives?

MJ: I am a black woman and engage with struggles for equality for black women wherever they may be. I understand colonialism, imperialism, racism, sexism and homophobia as being obstacles to achieving that equality so I stand for women’s rights and black people’s rights, wherever people are struggling. I see a class struggle as well and stand with the poor and oppressed. So while I now consider myself a cultural activist, it is these issues that I seek to highlight, as much as I think it’s important to write poems about beauty, honesty, emotions and the future.

MwB: The US and SA are two countries wherein the intersection between race, class, gender and xenophobia is flagrant, glaring and stark. In this regard what have been your experiences, observations and reflections within and about these two countries?

MJ: We, as progressive people, must take on all these struggles and understand how they intersect and can oppress us.

MwB: In the poem, “Revolutionary Woman”, you speak of how society, the system, tradition and culture are hell-bent on looking with disdain at woman of the calibre of Dora Tellez, Asanta Shakur, Nguyen Thi Binh, Leila Khaled, and Thenjiwe Mthintso. Can you share the experiences and motivation that birthed this poem, and elaborate on the machinations that the system uses to keep this kind of woman check?

MJ: Having worked in solidarity with Nicaragua, I had a picture of Dora Maria Tellez who was one of the three top commanders of that revolution. A friend was visiting and noticed the picture. After explaining who Dora Maria Tellez was, praising her for her leadership and revolutionary commitment, I ended the discussion by saying, “No one would encourage you to be a woman like that.” And then I started thinking of other women, revolutionary women and leaders who were not “conventional” or “traditional” women and because of their independent spirits were actually able to change their condition and that of their people. And basically these were the women that I wanted to be like, these were my role models. So the poem ends, “Don’t admire a revolutionary woman/Praise her/ Love her/ Honour her/Sing for her/Emulate her/ Don’t ADMIRE a revolutionary woman. (with sarcasm dripping). MwB: What is your take on progressive politics, the women’s movement and community development in South Africa and the US today?

MJ: The progressive movements all over the world have suffered enormous setbacks in the last 20 years, with the rise of neo-liberalism and US aggression, with wars and economically. The working class has been under attack and lost ground. The right-wing has gained strength unfortunately, which has resulted in the backward turn of most of the progressive struggles in the whole world – be it in South Africa, the US, the Middle East or Europe. Latin America has fought back and seen some gains, particularly around socialism, poverty and the environment.

MwB: How did your philosophical and ideological orientation, convictions and commitment out themselves in your involvement with the Feela Sistah! Spoken Word Collective?

MJ: Feela Sistah was a mechanism to highlight women’s writing and thought. At the time (2003 to 2004) women were marginalised within the poetry movement and our experiences were spoken of through the eyes of men. We tended to be viewed within the virgin/whore dichotomy and didn’t really speak to the actual lives women were leading. The work of women was frequently characterized as light and non-political. (As if rape, HIV/Aids and gender-based violence were not political.) Clearly our reality had to be heard so we formed Feela Sistah to say where a sista was at.

MwB: What are you currently involved in with regard to progressive politics, the women’s movement, literary work and cultural activism?

MJ: I am writing, telling my truth and reflecting the life I see around me and in the world. I spend most of my time in jazz clubs or at poetry readings. I continue to speak about my inner terrain because I think people need to be encouraged to share their deep thoughts and feelings as a way to break isolation and uniqueness. I perform for all kinds of causes and people as well as run workshops. I also have a poetry show on radio in August that features women and men reading their own work and talking about their processes and inspirations. I am watching the rise of the anti-racism movement in the US and the emergence of a new United Front in South Africa. I remain a proud feminist, a socialist, and internationalist and a “race” woman.

Finally, aside from writing, cultural activism and political awareness, I would say I have gained a certain spirituality. I’m not engaged in organised religion or anything but have a keen awareness of the connectedness to humanity. I find myself conscious of universal love, the reality of a life force, the importance of the earth.

– All images courtesy of the Myesha Jenkins official website