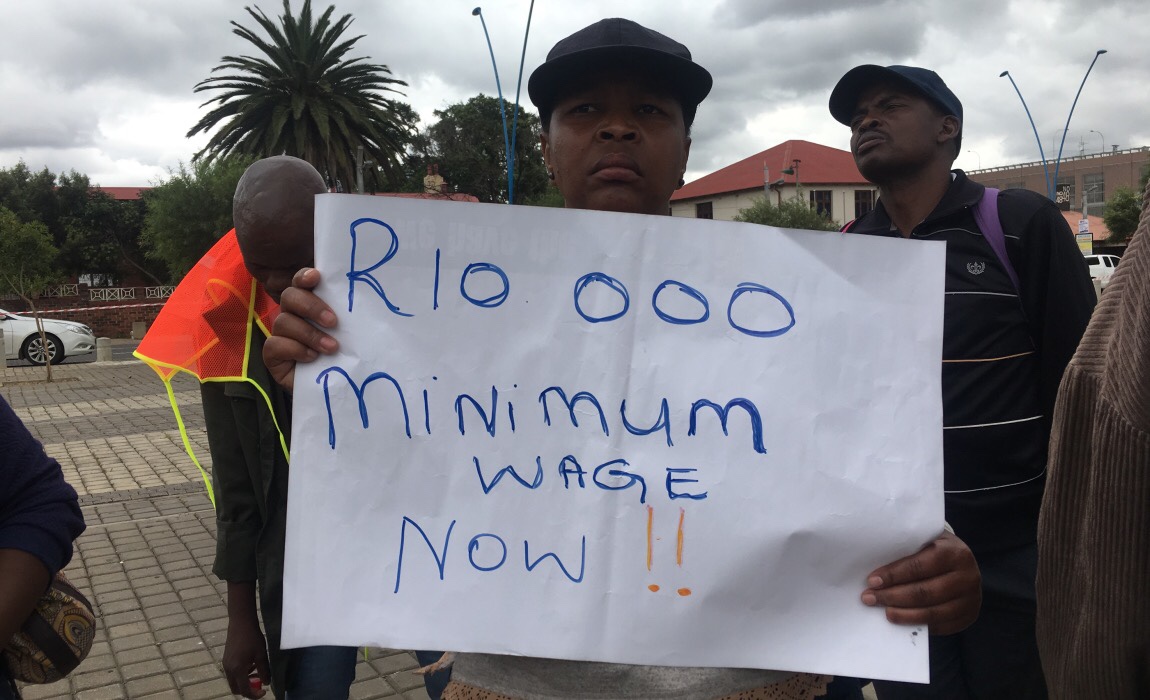 Fikile Sibisi is a cleaner at a school, the only breadwinner for eight people, and the mother of an eight-month-old son. â€œI never had maternity leave. I worked my entire pregnancy, stayed home for three days after giving birth, and then went back to work. Because I missed those three days, I didn’t get paid for the month.â€

Sibisi â€“ who is 27 years old and earns between R1 000 and R2 000 a month â€“ is one of many workers coming out under the banner of #OutsourcingMustFall to voice their frustrations at structures that keep them living under the same suppressive conditions.

â€œThey think we are animals – we earn nothing. I canâ€™t afford transport money, so I walk to work every day, which takes me an hour. We don’t know who employs us – we just have contractors.â€

As Finance Minister Pravin Gordhan prepares to deliver the budget speech on 22 February, workers across the country are mobilising to voice their grievances about outsourcing. â€œIt is clear the strategy of the state is to place more burdens on the poor. There are savage cuts being contemplated.Â Life Esidimeni is testament to this,â€ says Weizmann Hamilton, general secretary of the Workers and Socialist Party (WASP). The party initiated the #OutsourcingMustFall campaign, inspired by the student movement, and workers are speaking out about â€œpoor working conditions and the slave wages they receive,â€ says Hamilton.

â€œWe want our children to have free education and save this country,â€ says Luyolo Swelinkomo, 31, a security guard who earns R3 700 and supports his parents, wife, and children. â€œI can barely manage. I can’t even afford clothes.â€

While the call for outsourcing to end has remained one of the demands of the student movement, Hamilton says that many workers, not necessarily only on campus, have the same situation, in both the private and public sectors. â€œThe driving force across the board remains maximisation of profits, at the expense of workersâ€™ exploitation. The purpose of this campaign is to fight for a decent wage and decent working conditions.

“The average worker in South Africa supports eight to nine people on a salary. Unemployment affects at least eight million people in this country. Sixty percent of workers in this country earn less than R5 000 a month. We are totally opposed to a minimum wage of R3 500 – how is it possible to live on that? This is a fight not just for the workers, but for their dependants as well.â€ With effect from 1 April 2014, the Labour Relations Act was amended to prohibit the practice of employing workers to perform the same work for different pay and conditions â€“ â€œso besides just being morally wrong, the practice is also illegalâ€, says Hamilton.

Many workers have lost faith in the government. â€œThey are undermining us, the people who voted for them. If you die working, your family will get nothing and have no way to survive.â€ Lungile Balintulo, 53, a security guard who earns R3 700 a month and has five children. â€œWe are suffering so much. The only people who benefit are our bosses. We can’t have a decent life.â€

Sthembile, 35, is a single parent of three kids and looks after her parents. â€œI work as an admin clerk at a government hospital and take four taxis a day. I earn R2 000 a month, and I use R700 of that to pay for transport. Sometimes, they don’t pay. It’s very tough for me. Even now, they still owe me from last year. Last week our coordinator threatened us – she said she heard about rallies – and said she would terminate our contracts if we attended them.

“Our coordinators are corrupt. They hide things from us. They make us sign contracts which we don’t get copies of. If you try to talk to them, or say that you know what they’re doing, they move you out and displace you.â€

One Rea Vaya driver says workers â€œare controlled by the people who are supposed to give us answersâ€. 53-year-old John*, also a Rea Vaya driver, is worried he will be dismissed soon â€“ he earns around R8 000 a month, and has to support his wife and three sons, one of whom has just started tertiary studies, which John says he can barely afford to pay for. â€œWe are being exploited, working under contracts. We didn’t sign anything ourselves. They told us at the end of January that our contracts are ending at the end of February,â€ says Pretty, a 35-year-old street sweeper employed by the City of Johannesburg.

â€œI get R2 200 a month for sweeping the streets. I need to support six people with that. We don’t have gloves – we work with our bare hands, and our safety is at risk. When we try to report this to the people in charge, we get told to do our jobs. The new mayor promised us jobs, but what is he doing?â€

Her colleague, 36-year-old Xolani Buthelezi, has similar sentiments. â€œHerman Mashaba needs to give me a permanent job,â€ he says. â€œIn December, there was no bonus. We had to work on public holidays without pay. After being employed here for 18 months, I got told a month ago that my contract is ending now.â€