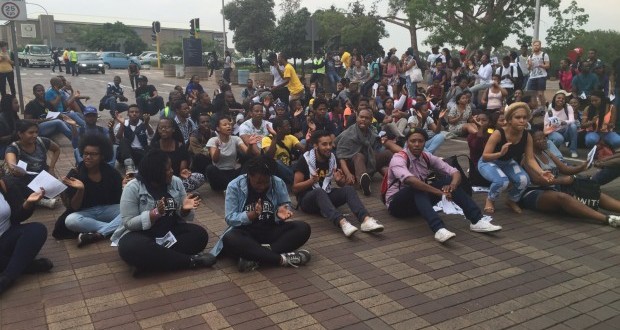 On Wednesday, Wits University students protested against the 10.5% fee increment that is proposed for 2016. What started off as a protest with less than a hundred people, quickly turned into hundreds of students that brought the university to a standstill. Amidst the commotion, there were three memorable moments.

1. PYA and EFF standing together The Progressive Youth Alliance (PYA) and EFF Wits are often on opposing teams when it comes to student leadership, but yesterday they put their party politics aside for a greater cause. EFF Wits Chairperson Vuyani Pambo was hand-in-hand with axed Wits SRC president Mcebo Dlamini, who is a die-hard ANC member and supporter. Project W leaders and members were also there. “This struggle is bigger than all our political agendas. This is about the students and the injustices happening at this university,” said Wits SRC President Shaeera Kalla.

2. Wits workers downed tools and stood in solidarity with students

Black outsourced poor workers left everything, they threw away their brooms to join us #WitsFeesMustFall left pic.twitter.com/DPaNJL0ASj

It was just last week when Wits students held a solidarity march against the outsourcing of labour at the university. The #Oct6 march saw many students demand the university management to stop outsourcing and pay workers such as cleaners a living wage. The Wits workers returned the favor yesterday as they marched with the students. “The students are always here for us. We must be there for them. If they as the clients of the university are treated badly – what more for us?” said an Impact Cleaning Services worker.

3. Academic staff forming a human barrier for the students

As the shut down went into the evening, and many Wits staff and students could not leave the campus, it was alleged that the university had called the South African Police Services to “disperse” the students. There was very little police presence in the beginning, but in the fear that more police would come, some of the Wits academic staff members volunteered themselves as the first line of defence. When police vehicles came to the entrances occupied by students, the academics stood in a line in front of the students until the police left.