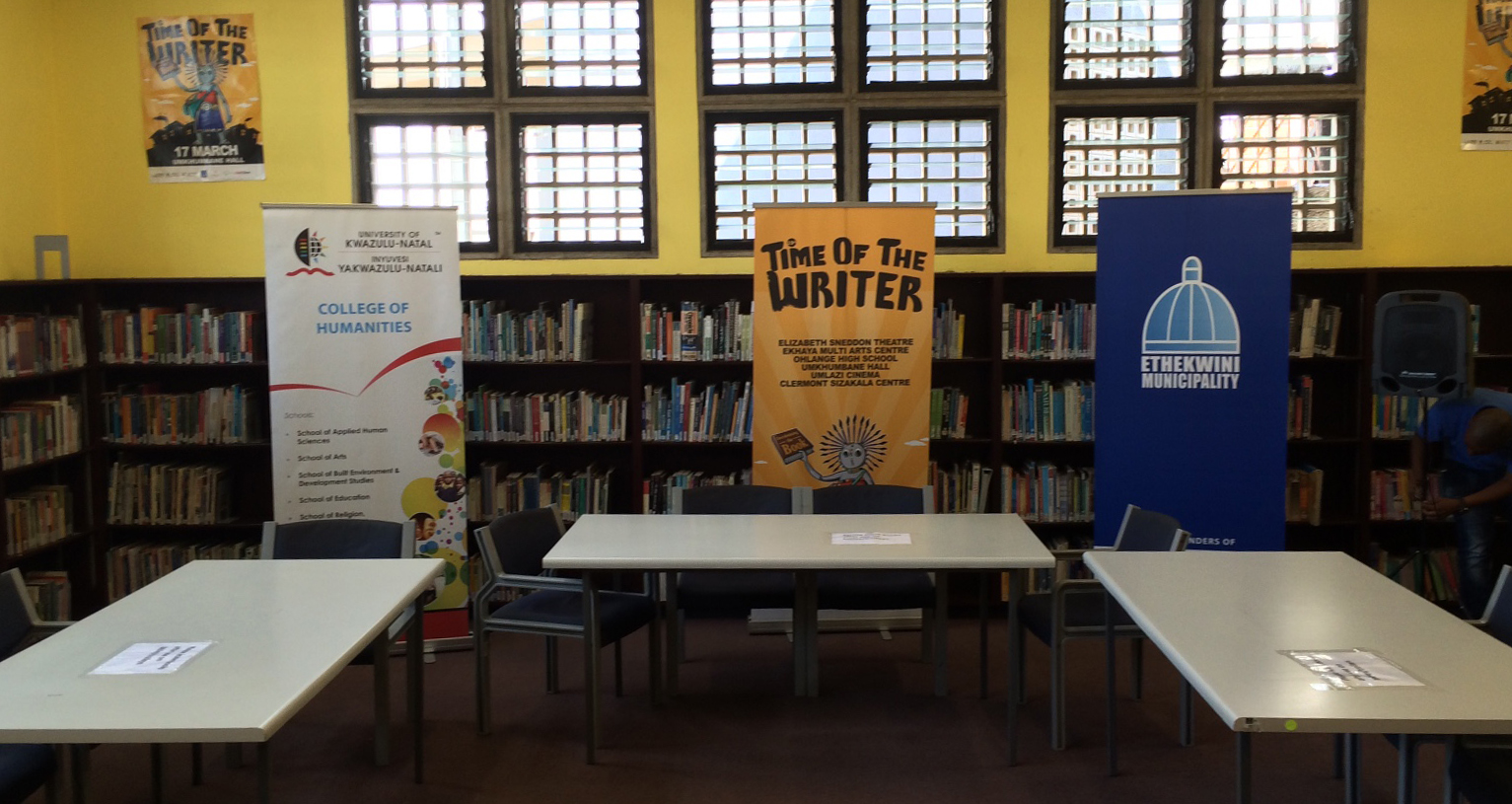 The Time of the Writer festival is upon us, and The Daily Vox team will be following it all over Kwazulu Natal, as authors and artists work on “Decolonising the book”. You can follow the happenings right here. Click here for what happened on day 1 and hereÂ for day 2’s roundup. And there you have it folks! Day 3, done and dusted. Be sure to check in tomorrow for more from today, including an exclusive interview withÂ Affluenza author Niq Mhlongo. For now though – good night!

Talking publishing when it comes toÂ The Book and Readership,Â the theme of decolonising local literature stayed strong.

.@BooksOfAfrica owner Fortiscue Helepi says demand for local books at his shop often outstrips supply, ‘it makes no sense to me’ #TOW16

‘Even now, people walking to work in Zimbabwe have their skaf’tin and their book, because they grew up reading’ – Van Driel #TOW16

On a panel entitledÂ They Write What They Like,Â author Niq Mhlongo gets set to have a discussion about his book AffluenzaÂ alongside Dr Danyela Demir.

Niq Mhlongo will now be having a discussion about his new book,Affluenza, with Dr Danyela Demir. #TOW2016pic.twitter.com/4VHHJk3X6L

And Mhlongo stayed true to the theme of the festival, discussing ideas of decolonisation and how it relects in his own work.

Music it’s our way of life, I grew up in Soweto where there can’t be any protest to the government without a song – Mhlongo. TOW2016

You can link it to black consciousness, but I grew up reading a lot of African writers series- Niq Mhlongo #TOW2016

You’re expecting me to be all philosophical, but I am just a writer – Niq Mhlongo #TOW2016

And Mhlongo was a hit with the crowd.

‘I’m just a writer… I write about my own experience of the world… I write a story.’ – Niq Mhlongo at #TOW2016 speaking about #Affluenza

The evening programme kicks off with Notes on Music, where Swazi-born vocalist and songwriter Zoe Masuku serenades the crowds.

The morning programme has concluded. We’ve got voxes with participants coming up soon and some reflections by our team on the ground. Don’t forget to follow #TOW2016 on Twitter and join us again this evening at 19:00 pm.Â Dana da Silva will be live tweeting Niq Mhlongo’s book launch from 7pm atÂ Umkhumbane Hall. Follow us @thedailyvox for live updates.

We’ve broken for lunch here in Durban. We’ll be back with a live Periscope of the afternoon panel but in the meantime here are some excerpts from the morning’s group discussions:

A participant in group 2 says people must give information to the library's. #TOW2016 pic.twitter.com/0N44oPX8ve

So the first session has broken up into discussion groups but check out these highlights from our live Twitter coverage and keep your eyes peeled for some video voxes from participants at Umkhumbane Library.

Many people in this country want to read,but the fact is that they don’t know where to start-@LifeMotivator #TOW2016 pic.twitter.com/6d5boD6Ytp

Jennifer Platt- We need to find us in our texts. #TOW2016 pic.twitter.com/c4wV19KX3q

Morning fam,Â ur team has just arrived at the Umkhumbane Library where they’re setting up for the day. The morning’s theme is “Conversations that Matter: The Book and Readership”. Our reporter Dana da Silva is at the library and will keep us updated as the day goes.