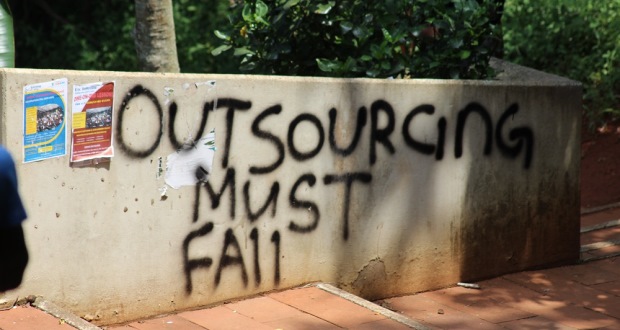 It has been two years since the rise of “Outsourcing Must Fall” movement, and finally, workers at the University of Pretoria (Tuks) are rejoicing as the institution has begun rolling out salary increase with full benefits.

For many years before the rise of the “Outsourcing must fall” movement, workers at universities were sourced from third-party companies outside of the institutions. The workers raised numerous concerns about this arrangement, including earning less salaries and working under harsh conditions.

“It was terrible, especially for cleaners,” said Juel Tseke, a shop steward at the University of Pretoria.

Tseke says an increase in salaries with full benefits brings nothing but joy to them, as this will improve quality of life for many families who have been struggling to make ends meet all these years.

“This will help so many families because people have been used. We are still in a process of harmonisation with the management and we are still fighting for fairness with some of the conditions they have brought forward, but as of December workers will be earning a decent salary,” he said.

The rise of “Outsourcing must fall” campaign came in the wake of the 2016 Fees Must Fall, where thousands of workers joined the student protests.

Tseke says that workers at UP were insourced back in 2016 after the protests, but they were still being paid less than R3,000.

“One would be lucky enough if they made up to R3,500 as most of salaries ranged between R1,500 to R2,000. Also, during holidays things were really tough because sometimes we would be told to go home as we are not needed, until the institution reopens.”

“In January we would only get paid for the days we worked in December, those we spent on holidays were not included. Some people would end up earning R500. This was the hardest time, we have families to support,” Tseke said.

Students who were at the forefront of the “Outsourcing must fall” movement at the University of Pretoria have expressed delight for the workers.

Naledi Chirwa, who was part of the students on ground labelled this as one of the Fees Must Fall victories.

“The news comes as one of the Fees Must Fall victories more essentially in particular for the EFF student command. There’s a great victory for students and workers” movement that has built over time through work, passion, commitment and determination.

“But it’s not the end because the institution still subject our parents to inhumane conditions, ostracisation and marginalization. But the insourcing victory is one for the books because it particularly has to do with how whiteness places a price tag on labour that is flooded by black people,” she said.

Although Tuks started insourcing its workers back in 2016, Rikus Delport of marketing services says it hasn’t been an easy process.

“While the insourcing of workers has been completed successfully, it has put strain on the University’s financial resources,” he said.

Meanwhile, as some institutions forge ahead with insourcing, the future of dismissed workers at the Durban University of Technology remains bleak.

In February 2016, more than 20 workers including security guards were arrested while protesting with students. These workers have since been dismissed. Others are still stuck in endless court hearings.

Zandile Sibanyoni* was among the dismissed group of workers at DUT and says that it’s been daunting two years since.

“We left without a cent. Even when we tried to claim our money we were told that we were late. This has been the hardest two years, being unemployed and having to provide for the kids at the same time was not easy.”

“Others have been attending a case that they don’t even know what their crime is, and the sad part is that the contractor we used to work for is no longer providing service at the institution. So, even if people attend the case they do so by themselves, the company which laid the charges no longer follows or attend that case,” she said.

Mavis Mqadi (53), a former cleaner at DUT was one of the arrested workers. She says having to travel from home in eMkhomazi to the city centre for court appearance has been hard on her since she is unemployed.

“My children, who don’t have any decent jobs have to give me money to travel to Durban each time I have to appear before court. It’s really frustrating because I’m old now,” she said.

The workers were arrested alongside FMF activist Bonginkosi Khanyile who is waiting for his sentencing in January 2019.

Khanyile was among students who garnered support for workers during the “Outsourcing must fall” movement, and he has expressed concern about workers who were dismissed and arrested.

“It’s a very sad story and if I had supernatural powers, I’d have made positive intervention by now. These are old people, whom some of them are suffering from illnesses such as diabetes.”

“The system has a way of dividing the people and unfortunately these workers became casualties of the situation like many of us, so we just accepted that we were all casualties,” he said.