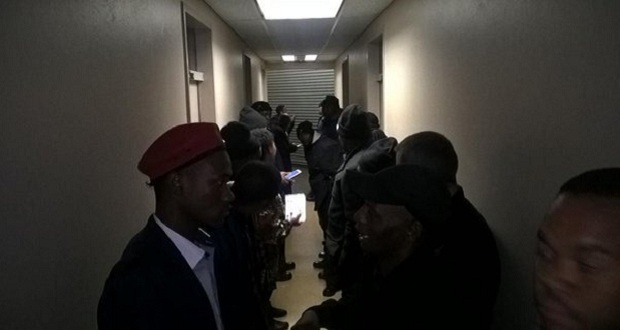 Students who didnâ€™t have accommodation had been housed in society offices by student activists instead of allowing them sleep in lecture halls, where they are often removed by campus security.

â€œAt about 2am on Sunday, students were forcefully evicted from the offices by bouncers. No reason has been given to us by the university as to why students are being evicted, but it must be because of the auditorium being burnt. If the university is accusing students of setting the building alight, they must provide the proof,â€ said Mtembu, who insists students could not have burnt the building. â€œStudents and the UJ Fees Must Fall movement are against the burning of the building. Weâ€™re distancing ourselves from it,â€ Mtembu added.

Students evicted from the offices were left to roam around the campus following the evictions and could not gather in groups due to fear of being harassed by bouncers and accused of staging protests. Some of the students who have been sleeping in these offices since the beginning of the semester have had to go back to their hometowns, as far as the North-West province, because they could not be accommodated. Others have been taken in by the SRC.

Amanda Nyide, secretary of the UJAPK Societies Council, said on Facebook that no student was left stranded after they were evicted from the society offices. She added that alternative arrangements were made for students who did not have accommodation near the university.

â€œSleeping in the society offices is not comfortable but itâ€™s safer than lecture halls. We give preference to women students because the office doors can be looked. We still donâ€™t know where some of the students are sleeping since theyâ€™ve been evicted. Exams are coming up and this is going to get in the way of them focusing on their studies,â€ said the activist.

According to universityâ€™s Acting Executive Director of Student Affairs at the Auckland Park campus, Godfrey Helani, students werenâ€™t evicted from any of the residences. â€œI hereby confirm that there are no students who were evicted from UJ residences,â€ he said.

People took to Twitter to express the unfairness of evicting students when exams are coming up.

But how can UJ kick students out in the middle of the night? Where are they expected to go to? Worse, exams are about to start. #UJEviction

#UJeviction exposes a bigger question about many ways black students suffer in silence. We need to dismantle this corporatised university

What is happening at UJ is a catastrophe, you evict registered students with no warning? How are they going cope during exams. #Ujeviction