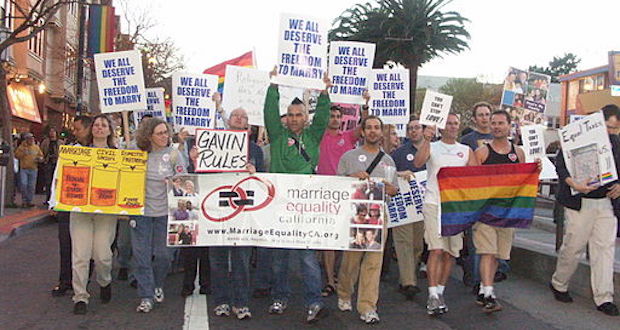 The Presbyterian Church USA (PCUSA) made history on Tuesday when it voted in favour of recognising same-sex marriage. But the decision hasnâ€™t been all wedding bells and confetti.

The landmark decision entailed a change to the churchâ€™s constitution, with the word â€œmarriageâ€ being redefined. Where previously it had referred to a union â€œbetween a man and a womanâ€, it now refers to â€œtwo people, traditionally a man and a womanâ€.

The PCUSA is the largest Protestant denomination in the US, representing about 1.8-million people.

Reverend Brian Ellison, the executive director of the Covenant Network of Presbyterians, told the Huffington PostÂ it was an important moment for the church, even though there was still serious disagreement about the issue within the church.

â€œThis moment is a real opportunity for us to struggle, to work through differences, but still be committed to each other,â€ he said.Â Ellisonâ€™s denomination has been advocating for LGBT rights for almost 20 years.

But not all church members agree with the outcome. Paul Detterman, the national director of The Fellowship Community, told The New York Times that objections from more conservative groups within the church were â€œin no way, shape or form anti-gayâ€, but rather reflected â€œconcern that the church is capitulating to the culture and is misrepresenting the message of Scripture.â€

Detterman also predicted that the move would lead to â€œa sizeable wave, of conservative folk leavingâ€ the church.

The struggle to gain religious recognition of same-sex marriage is unfolding globally. Although South Africa was the fifth country in the world and the first African country to legalise same-sex marriage in 2007, the countryâ€™s four major denominations â€“ the Presbyterian Church, Anglican Church, Catholic Church, and Baptist Church â€“ banned their clergy from officiating same-sex marriages that same year.