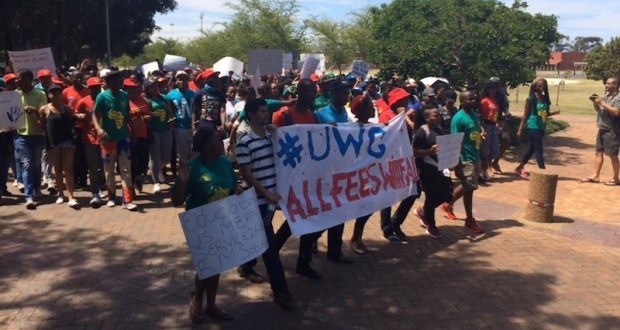 Students at UWC have rejected it anÂ agreement betweenÂ the SRC and the Vice Chancellor. The agreement was seen as an important moment in addressing key issues, including fee increases, registration fees, outstanding debt and outsourcing. Students however say the agreement failed to provide specific details. AMANDA XULU explains why.

Let’s back track a day first. UWC’sÂ #FeesWillFall campaignÂ reached a critical moment on Tuesday as vice-chancellor Tyrone Pretorius finally addressed over 2,000 students at an SRC-organised mass meeting on campus. (Pretorius had been conspicuous in his absence from the protests that have wracked UWC over the past few weeks.)

The mood at the mass meeting was volatile, with much of the studentsâ€™ ire focused on the SRC itself. The SRC has come under a storm of criticism from students and the #FeesWillFall movement for apparently siding with management, and for telling students to not engage with those who are protesting. These feelings of hostility towards the SRC culminated with students booing SRC president Akhona Landu, who had tried to facilitate the meeting.

When Lindokuhle Mandyoli, a member of the #FeesWillFall leadership, attemped to address the crowd, the SRC initiated a walk-out. Students were incensed and ssang â€œVoetsek!â€ and â€œFok off!â€ to the SRC. One student describing the tactic as â€œchildishâ€. In the end, the SRC turned back.

After calm had been restored, Mandyoli announced that management, the SRC and the #FeesWillFall leadership would meet for negotiations and discussions. They then entered a marathon seven-hour discussion, behind closed doors, which only ended at 11pm.

Thereafter, an agreement was apparently signed between the parties.

An agreement was signed tonight between UWC management, UWC SRC and #feesmustfall! pic.twitter.com/3buGksZltA

According to minutes from the meeting, the discussion focused on fee increments, registration fees and outstanding debt. Pretorius urged the students to â€œnot point fingersâ€ any more and instead work in conjunction with the university to find solutions. He said the university was committed to no fee increments for 2016 and supports the call for free education, and added that it would campaign for governmental support in making this a reality.

On the matter of registration fees and outstanding debt, the solutions reached were not as clear cut. The agreement reached concerning registration fees was that â€œfinancially needy students, bursary holders, and NSFAS recipients will not pay registration or upfront fees and will not be financially excluded.â€ However, the definition of a â€œneedyâ€ student was said to pose a challenge, and Pretorius called for a task team to find a contextual definition to work with.

Another point of contention was the matter of outstanding debt. The agreement proposed that â€œall students would be able to participate in their graduation ceremoniesâ€ despite having debt. However, Pretorius also said that students who still have debt would not receive their degrees until payment had been made, but would â€œreceive a letter indicating that a student has completed the academic requirements of a specific degreeâ€. The agreement also called for students to sign an agreement with the university, stating that they would start repaying the debt once employed.

Students expressed disappointment and uncertaintainy concerning the outcome of the meeting.

Student Thozama Nozuko said she had mixed feelings about the outcome.

â€œNot all of our demands were addressed, but we did manage to hear [managementâ€™s] side of the story, where they fully explained UWCâ€™s history and current struggle due to being a previously disadvantaged, black university, which means that we do not have the luxury of large endowments like UCT, Wits etc. What came out of this meeting was that we, as students, became a bit more understanding, but still insist on management engaging with our demands in a responsible way,â€ she said. But the #FeesWillFall group were not happy with the resolution that had apparently been agreed on.Â The groupâ€™s spokesperson, Kaizer Festile said many of the students demands were addressed only in vague terms during the meeting.

â€œThe students felt that that this was not an agreement, as it closed the avenue of negotiation and discussion with the University,â€ he said.

On Wednesday morning, #FeesWillFall released a statement rejecting the outcomes of the meeting and denying that an agreement had been reached. The signatures on the document presented at the end of the meeting was not an acceptance of the agreement, they said, but a verification of the minutes.

â€œIt is not up to a delegation to agree to anything without full consultation and approval of students,â€ they said.

In terms of the agreement, end of year exams at UWC are set to begin on November 9, and graduation is set to continue as planned in December.