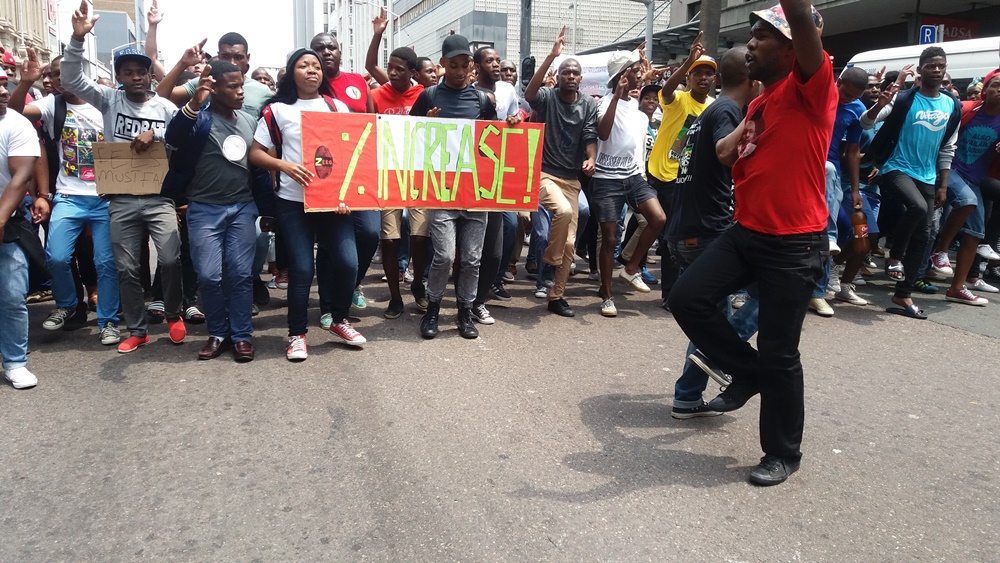 When Wits students decided to co-ordinate the #FeesMustFall protests from the corridors of the university’s anthropology department, anthropology lecturer KELLY GILLESPIE was offered a unique perspective on the student organising, comradeship and support at the core of the movement – and on the moment when the ANC came to call “its” students to order.

The corridor of the anthropology department at Wits University has been an exciting place to be over the past three weeks. Just around the corner from the occupied Solomon House, it has served as the logistics hub for the student movement at Wits. Toilet paper, apples, sanitary pads and Oros have been piled high against the walls. Daily stock-takes and the receiving of donations, meal-planning and Makro-runs have been co-ordinated with great care by a disciplined team of students and staff that became a seldom-acknowledged backbone of the student movement. Under the Whatsapp group named Love and Logistics, this team co-ordinated the daily feeding, cleaning and logistics for up to 1,500 people.

As much of this work was co-ordinated from my office in the anthropology department, I got to see its operation up close. My office transformed from a rather austere place of scholarship and consultation into a place for student conversation and reflection. The logistics team had my spare office key and used the office as a resource centre for the movement.

I would often arrive to find 10 people sitting on the couch and floor in intense discussion on what was happening in the movement, in their lives, and in their relationships to the protests. As a result, I got to know many of the protesting students, and to hear their thoughts and positions on the movement as it rapidly evolved. And I witnessed the nature of university space change as our Wits corridor became a safe space for student organising, comradeship and support.

So it was such a shock for all of us when, a week after #FeesMustFall began at Wits, the ANC sent delegates from national structures to come and meet with the Wits SRC in the Anthropology Museum, in that same corridor. The meeting became infamous among Wits students after a twitterstorm of outrage and disbelief. As one student put it, “They had their meeting right in the middle of our food!”

The infamous ANC/SRC meeting
The meeting, its logics and its consequences, became one of the most significant moments in the Wits student movement. Why? Why was this meeting met with such horror? What was wrong with ANC representatives meeting with a largely ANC-aligned SRC at Wits?

From handwritten notes ripped from the notebooks of SRC members by angry fellow students when they discovered the meeting, it was clear that the ANC was trying to steer the direction of the student protests. In the context of ongoing protests for free education after President Jacob Zuma announced the 0% increase for 2016 fees, the meeting notes read, “Our mandate was very clear: 0% fee increase, we have achieved it”; “Pull out of the protests on a high morale”; “Now is our time to take charge of the situation”; “Postpone the matter”.

The ANC sent its delegates to convince the ANC-aligned students to close down the bigger demands that the student movement was articulating, demands which showed the ANC up for not having met its 1994 election promise of “Free Quality Education For All”.

The meeting represented the routine way in which the ANC has come to deal with dissent and critique as its control of political imagination wanes and slips out of its grasp. The ANC was at Wits to call “its” students to order in the cunning politics of deployment. It was there to regulate the national narrative and to deploy its ideological soldiers to call to order those that dared to open up a strong critique of its governance. It was there to sustain the illusion that it had provided for poor black South Africans by the stingy 0% – like the matchbox houses and the social grants that prevent starvation â€“ that give just enough to survive but never enough for decent lives.

Turning point for the movement
The ANC-SRC meeting was a significant turning point in the Wits student movement. It provided a line in the sand that differentiated and radicalised the movement. The students that remained in the protests after the granting of 0% have made me enormously proud to teach at Wits. They saw clearly how the SRC had sold out by acting as deployees of the ruling party in the student movement. They refused to participate in the closing down of political critique. Angry, they escalated the protests and insisted that they would not be sold for 0%.

Student after student stood up in meetings, debated in my office, called each other out on how they would not back down on their two core demands of free education and the end to the outsourcing of service workers on campus. They would not sell out on these broader demands for the sake of their own degrees or for a foot up into political careers in the ANC. They refocused their energies over the past week, and secured Sundayâ€™s major victory for workers at Wits: a commitment from management to end outsourcing at Wits.

I have watched the student movement at Wits transform from a marching crowd led mostly by ANC-aligned students into a critical, independent and rapidly democratising movement. The pedagogies of struggle have produced a group of brave and principled students that I hope will grow into our future national leaders. I trust they know that they will always be welcome in my office.

Kelly Gillespie is a senior lecturer in the Department of Anthropology at the University of the Witwatersrand. She is also a founder and convener of the Johannesburg Workshop in Theory and Criticism, based at WISER.