Home As Told to “We are more than drugs, gangsters and gold teeth”
WhatsApp
Facebook
Twitter
Email
Print 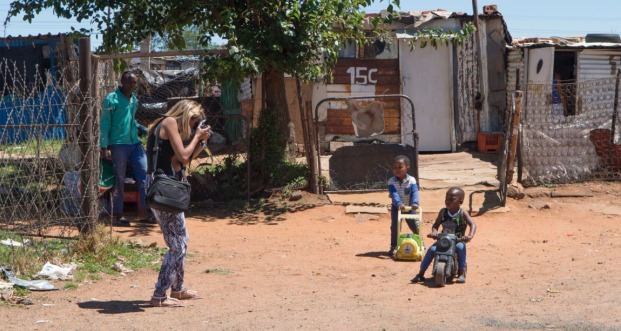 Eldorado Park has become synonymous with drugs dens and gangsterism. Journalist MAXINE BECKET shares her experience of reporting in one of South Africa’s drug capitals with Mbali Zwane.

It pains me to know that a place I call home, is home to drug lords and notorious gangsters as well. There’s good happening in this community but it gets overshadowed by the bad things that happen. I try to balance my reporting as a community journalist because, despite the township being known as a drug capital, residents do take the initiative in tackling the drugs and gangsterism – a mushrooming parasite.

I’ve received a couple of death threats over the two years that I have been reporting on Eldorado Park, when I have written about things to do with gangsters. A few months ago, a gangster was shot dead in broad daylight. The family contacted me and threatened my life for covering the story before they even read the article. Some days later, they called me to help them find the killers.

Things have changed in my 28 years of growing up here – then children could play in the streets, carefree and unbothered by drug lords and being recruited as runners. The drugs and gangsterism have always been an issue: the only difference is that it has escalated over the years.

Unemployment coupled with poverty fuels the trade of drugs, and sometimes human beings. Young girls and boys run away from home and opt to work and live in “lolly lounges” (houses used as drug hubs by gangsters where young girls are lured into drug abuse and sex work) or work as drug mules. Gangsterism perpetuates the lifestyle. The protection that comes with being part of a gang is appealing for youngsters in a lawless society.

The president has been here to help us fight against drugs. This was prompted by a letter he received from one of Eldorado Park’s community leaders, who witnessed her son’s battle with addiction to crystal meth (tik). That was in 2013, and he committed to lead the community’s turnaround strategy and vowed to work with the community to create employment and close down lolly lounges.

Three months later, the cameras and lights were turned off and the assistance fizzled out. The support and police visibility has almost vanished but you know us Coloureds, we’re a family so residents have taken the initiative to keep going.

Residents have formed organisations and programmes to work together in developing and uplifting the community. Girls as young as 9 are rescued from lolly lounges and taken into safe houses for rehabilitation, then integrated back into the community with skills to work against the odds. The Local Drug Action Committee (LDAC) teams up with police to raid drug dens and patrol the area.

The raids can go on until the early hours of the morning, and I’d still be there. It is important for the community to know that we’re fighting this battle, and we’re making progress. They rely on the local newspaper to inform them of everything and anything that happens in the community. It is my love and passion for where I come from that keeps me going.

Death threats and harassment are not the only things I receive from Eldos residents. I’ve been showered with flowers and thank you cards and listed as the community’s top 100 influential people making a difference. I’ve also been presented with several awards from organisations recognising my work. I consider these as an honour from the community I serve.

We are more than drugs, gangsters and gold teeth. We’re more than just the stereotypes. Walk through these streets of Eldos and you’ll realise there’s more to the community than what meets the eye. The area oozes with brotherhood and sisterhood. This community has raised academics, comedians and models among other things.

We are a praying community, fighting against a social ill.

*Editors’ note: This is the first in a series on the community of Eldorado Park by Mbali Zwane.

– As told to Mbali Zwane, edited for brevity and clarity
– Featured image by Bodo Korsig