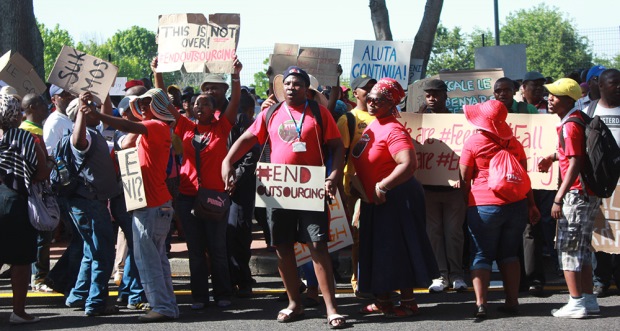 The protests at the University of Johannesburg (UJ) against outsourcing of services continue to expose the working conditions of cleaners who often go invisible on campus. MBALI ZWANE reports.

“We’ve normalised that black people can be exploited. We’ve made it okay that workers can feed their families on the R2,000-plus that they earn,” said Thato Magano, one of the 141 protestors arrested outside UJÂ recently on charges of public violence and contravening a court interdict.

The charges were withdrawn on Monday pending further investigation.

Magano, a politics masters student at Wits University, said the involvement of students in the protest against outsourcing of services is necessary.

“Itâ€™s important that we’re in solidarity with the workers. Although the situation of outsourcing doesn’t affect all of us directly, I recognise the interconnectedness between an outsourced worker and a black graduate in corporate spaces,” he said.

Inequality is being prescribed to black lives, said Magano, who desribed the practise of outsourcing as “deeply problematic”.

Joyce Mlangeni, who has been working as a cleaner at UJ for the past 10 years said the end of outsourcing will improve lives.

According to Mlangeni, she only receives R2,600 at the end of each month.

“What I earn is little and I cannot provide for my family. Insourcing will improve my life, I’ll earn more, receive benefits enjoyed by other UJ staff and my children will study for free.

“I’m happy and thankful to students who have been supporting us because it shows that they value us as their elders and parents,” said Mlangeni, who sported an injured eye and bruised body, the result of a fight that broke out after between the protestors and security guards during the Occupy UJ strategy.

Mlangeni’s child is currently a second-year student at the university and she is battling to provide the necessities for her child.

“We have to break the cycle of poverty somewhere. This starts with our children and that is why it is necessary for them to get a tertiary qualification,” said Mlangeni.

Sophie Mabuza*, a 56-year-old cleaner with a busted lip and swollen feet, said the involvement of students in the protest has become instrumental in enabling the workers to voice their concerns.

“We have been striking for better working conditions for the longest time but we were dismissed and labelled unreasonable. The students have helped us get the numbers and pressure necessary to be heard, she said.

“We are being exploited and tossed around like a football but we continue to work here because we need the money.”

Mabuza hasn’t slept in her bed since last week. She slept at UJ during the Occupy UJ protest and just off campus during the two-week protest.

“I am tired and my body hurts. Last week I was beaten up and choked [against] a tree by someone young enough to be my child. I probably would have died if I hadn’t shoved my water bottle in his face,” she said.

“I want what I want and no amount of violence and tiredness will make me back down.” she said.

Mabuza said that what pains her and other cleaners most, is that theyâ€™re treated differently from the gardeners and security staff on campus.

â€œWe’re at the lowest of levels here and it shows,” she said.

The striking workers are calling for clarity regarding their pension funds since they were informed that they had been ‘sold’ to a new company.

“We came to work one morning and papers had been placed on walls informing us that we were no longer employed by Elite but by Servest,” said Mabuza.

On Thursday, following a meeting between management, the SRC and leaders of the protesting students and workers, the university issued a statement saying that it was committing to insourcing, that the children of outsourced workers who are admitted to the university would be exempted from paying tuition fees in 2016, and that it would further discuss the conditions for workers to return to work with their respective employers.

But the workers have vowed to continue protesting until their demands have been met by the university’s management and the workers’ union, Nehawu.

“The statement released doesn’t address the issues at hand, therefore the protests will continue. Workers and students are not happy with the vice-chancellor’s proposed strategies,” said Mmangaliso Mkhonta, secretary general of the university’s SRC.

*Not her real name.

Mbali Zwane is a multimedia journalist and news junkie with a passion for human rights. Follow her on Twitter.
– Featured image by Ra’eesa Pather