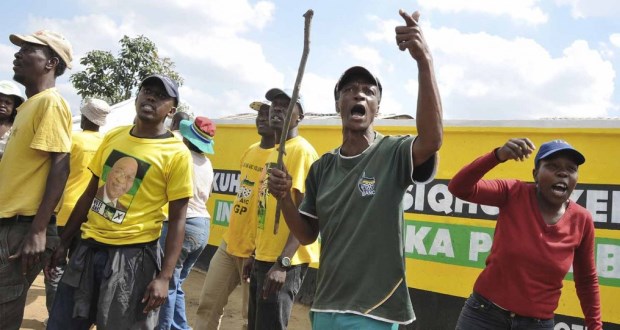 RAMBUNCTIOUS SITHOLE asks whether the revolutionaries of days gone by have set themselves up for a counter-revolution.Â

Good news is short supply. Weâ€™ve learned that the Minister of Finance may, or may not be arrested, for something or the other. Then thereâ€™s been ructions in Parliament between the EFF and the president again while the ratings agencies are threatening a downgrade later this year. The outlook was universally gloomy. This inclement weather has only been briefly leavened by Mr Cloudy who manufactured his own good news in raising the local music content on SABC radio to 90%. It appeared that he was pre-emptively doing this to offset his own bad news when Judge Davis refused his appeal against his own impending job loss. The bill for this largesse is still in the post as it mainly affects the SABCâ€™s commercial radio stations like Radio 5 and Radio Metro, whose business plans, let us say generously, are not constructed around 90% local airplay.

I have been pondering a truism identified by the French historian, Alexis de Tocqueville in his musings on the causes of the French revolution, that favourite matric exam question, certainly for my generation. In his book, The Old Regime and the Revolution, de Tocqueville observed that, “Revolutions are not always brought about by a decline from bad to worse. Nations that have endured patiently and almost unconsciously the most overwhelming oppression, often burst into rebellion against the yoke the moment it begins to grow lighterâ€¦ Evils which are patiently endured when they seem inevitable, become intolerable when once the idea of escape from them is suggested”. And who is it that has suggested a way of escape? Why our very own President Jacob Zuma. This was the promise on which he was elected. Away with the financial discipline and austerity of the Mbeki administration! Everybody can now grow rich! This was his message and he followed it up with generous increases to the salaries of the civil service, doubled the size of the Cabinet, invented new ministries, tried to hand out massive tracts of land to the traditional leaders and encouraged uninhibited gambling with the fortunes of public enterprises and unlimited tenders. Father Xmas had arrived!

So letâ€™s do a little fact-check.
Is there widespread rebellion in the land? Fact.
Are members of the regime blaming external forces? Fact.
Are they blaming the media, civil society and the judges? Fact.
Are they starting to tear each other apart? Fact.
Are the poor and unemployed crying out? Fact.
Has the economy collapsed? Not yet.

So the flag bearers of the regime, of the glorious South African Revolution, are on the cusp of creating their own counter-revolution. And it will happen because the Zuma regime encouraged people to believe that everything would be just mnandi in Mzansi. What can I say? Alexis has spoken. Aesop has spoken. Chinua has spoken. Sic transit Revolutio!

In his fictional life, Rambunctious Sithole is a professor in Marxist Cosmology at the University of Venda. Prior to that he was a professor of Hitler Studies at the University of Transkei, but was asked to leave when a scandal erupted over his proposal for an eco-tourism project marketing medicinal dagga on the Wild Coast. He is the editor of a forthcoming novel called Blue Eland Foxtrot. It consists of two texts about students in the 1970s and 80s, which he discovered while browsing for secondhand books on the Grand Parade in Cape Town.