Home Features 16 days of activism: Whatâ€™s faith got to do with it?
WhatsApp
Facebook
Twitter
Email
Print 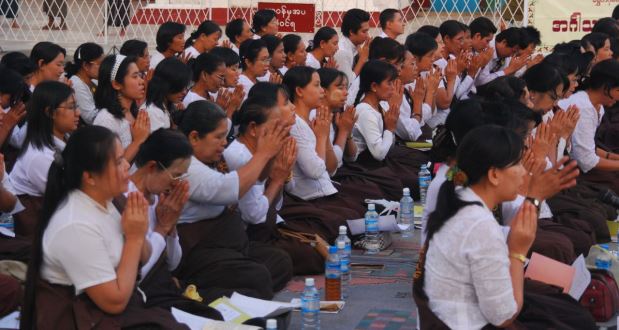 As the 16 days of activism against gender violence begins, weÂ need to question the role of all faiths and how they contribute to all aspects of societal life, including violence against women and children, write LIZLE LOOTS and ELISABET LE ROUX.

Itâ€™s that time of year again. Twitter flourishing in silent screams as the bandwagon passes its favourite meeting places of opinions and outrage about gender-based violence and the 16 Days of Activism against Gender Violence. Despite the jeers and cheers of feminist activists and questions about just how much impact such activism has, weâ€™ve seen immense growth in theÂ campaign over the years. This year we have the Sustainable Development Goals to drive us, and the 16 Days campaign itself has approximately 5,478 organisations and groups from 187 countries and territories making waves. Many of these are rooted in faith.

We live in a secular world. Or do we? As international affairs unfold, we need to question the role of faith – all faiths – and how they undermine and/or contribute to all aspects of individual, family, community and societal life. Whether you embrace or renounce religion, faith has a role to play.

Lizleâ€™s recent visit to Myanmar (Burma) was a reminder of the intrinsic role of faith in the lives of the Burmese people. Emerging from nearly six decades of isolation and civil war, Myanmar is reminiscent of South Africa in itsÂ first post-apartheid years. Hopeful hearts, broken minds and an emerging realisation of high levels of sexual violence within all communities regardless of background, race or tribe across this exquisite land. The difference, however, is the critical role that faith plays in war and in the pursuit of justice as a hopeful democracy looms.

In Myanmar, religion is intertwined with public or private life – even marked on a simple packet of potato crisps: â€œSuitable for all religions.â€ Faith certainly has its champions, but still, conversations reveal that women are often expelled or fined by their faith communities for their rape, rendering them more vulnerable and financially devastated while their perpetrators roam free. Yet, women remain deeply committed to their faith, and hopeful of support from their religious leaders.

Myanmar is one example of many across the globe. In conflict and post-conflict, places of worship may often be the first refuge, making faith leaders first responders to the needs of those seeking safe spaces and essential health services. In peace, conflict and post-conflict, almost all faiths demand that the hopeless, the helpless and the destitute, are loved and cared for.

It has been argued that faith leaders may perpetuate violence and inequality, specifically through using scripture in harmful ways. An article by Elisabet on research done in conflict-affected African states highlights how many faith leaders are exacerbating violent attitudes: â€œThere is a need for pastors in the field that can cope with this situation. At the moment -Â at best -Â they do not have the tools to deal with it and respond to it. At worst they are condoning and promoting it.â€

It has become du jour to scoff at faith and faith communities, or to vilify them -Â especially in the light of recent international events. However, in doing so, we are neglecting to cooperate and collaborate with an influential sector of civil society. Our recent scoping study for UKâ€™s DFID, lead by Elisabet, on the role of faith communities in preventing and responding to sexual and gender-based violence, makes valuable recommendations for how the secular and faith sectors can and should be working together to address violence. These include:
â€¢ There is a need to document, evaluate and disseminate evidence for faith involvement in sexual and gender-based violence prevention and response. This can be done by faith actors, researchers, policy makers, and yes, the media.
â€¢ We need rigorous programmes with longer-term, context-appropriate interventions. Not just taking programmes from America to Liberia, for instance. (In the Democratic Republic of Congo, an exciting innovation project by Tearfund UK is currently doing research and evaluating the impact of faith- based programmes.)
â€¢ Authoritative and influential opinion leaders are key for driving this. (So, Twitter experts out there, are you willing and able?)
â€¢ This should be a partnership with various stakeholders from all sectors of society
â€¢ Both faith and secular actors should actively attempt to network and collaborate – find common ground to build up the good work being done
â€¢ Donors and policy makers should include various faith actors in the development of policies and strategies that ascertain to sexual and gender-based violence

The report is not alone in recommending greater cross-sector collaboration. Cutting-edge research organisations and initiatives such as the World Bank, SVRI, SA Medical Research Council, What Works to Prevent VAWG, LSHTM and many more recommend a multi-sectoral approach to ending violence against women. This means that faith and faith communities around the world, and especially in war-torn countries, cannot be ignored any longer.

For better or worse, faith and faith communities are here and are influential, and we need to start engaging them to change harmful attitudes and behaviours in communities which contribute to violence againstÂ women and children.

Both Lizle Loots and Elisabet le Roux are sociologists by training. Lizle is a research consultant in the women, peace and security sector, focusing on rape and sexual violence in war and post-war settings. She has previously worked as public health researcher under the leadership of the South African Medical Research Council and The Sexual Violence Research Initiative.

Elisabet is the Research Director at the Unit for Religion and Development Research (URDR), a consultancy research unit at Stellenbosch University. She is a faith and development expert, with a particular focus on sexual and gender-based violence. With both a theology and sociology background, she has done research with noted faith-based organisations such as World Vision, Tearfund and Tyndale House Foundation.