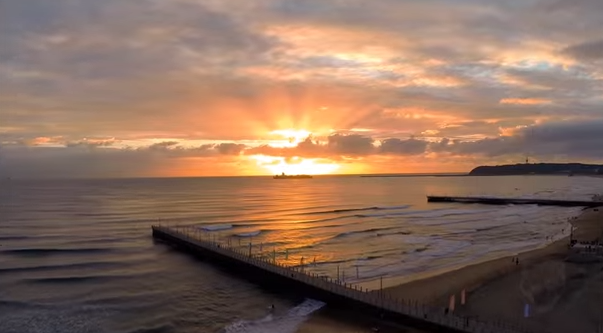 Social media exploded on Tuesday night when a short film made its way on to YouTube. The film, uploaded by Novos Digital Cinema, features a series of splendid aerial shots and time lapses’ filmed over a period of two years.

The short film, just over three minutes long, will leave you breathless. Within 24 hours, the film had amassed more than 15,000 views on YouTube and left a trail of feels across the Internet. In less than three days it had over 200,00 Facebook views and 60,000 views on YouTube.

The producers, Hill; Kierran Allen and Nathan Pellow-Jarman, are all from Durban, and said they wanted to showcase the beauty of the city that the rest of the world hadn’t been shown yet.

“We have filmed in various locations around the world and have always been amazed at the quality of life, cost of living and Raw beauty that Durban has to offer,” said Hill.

“We felt Durban really needed to be showcased at an international level of production to truly reveal her beauty to the world, so we decided to take the project on in our own time and at our own expense.”

The film was shot over two years, in whatever time they had between other projects.

“When we were not on a shoot locally or abroad, we would film as much as we possibly could in Durban. We would patiently wait for cold fronts to pass, the rains would clear the atmosphere and provide incredible clarity, which is an essential part of the process in the production of digital cinema,” Hill said.

“There is so much negativity out there about our country at the moment and we just decided it was time to put something positive out there and break the cycle of constant negativity that is portrayed in the media,” he added. Durban has long been seen as the step-sister of Cape Town as a destination of preference for tourists in the country. But it does seem that some efforts are underway to change the city’s image.

In July, the New York Times included Durban on its list of 52 places to visit in 2015. In October, Durban’sÂ cuisineÂ featured again in the New York Times, in another remarkable feature titled: “In Durban, South Africa, 13 curry stops in five days”.

But back to the film. Don’t take our word for it. Why not watch it yourself?