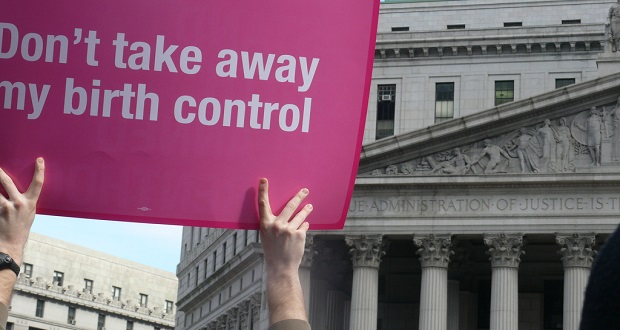 This week, eight rich white men took a decision that directly affects the lives of millions of women and girls in the developing world. US president Donald Trump signed the Mexico City Policy (or the Global Gag Rule, as it is referred to) cutting US funding for health clinics that provide reproductive health services worldwide.

The Daily Vox spoke to Andrea Thompson of Marie Stopes South Africa – which is part of an international non-governmental organisation (NGO) that provides contraception and safe abortion services to 37 countries worldwide – about the effect that the Global Gag Rule will have on South Africa.

What kinds of health services does Marie Stopes provide women in South Africa?
Marie Stopes runs a national network of sexual and reproductive healthcare clinics. We provide a large number of the safe abortion services nationally. We also provide a range of other services including contraception, well woman exams (which evaluate the reproductive health of women), pap smears, HIV counselling and testing, and Sexually Transmitted Infection (STI) testing and treatment.

How dependent are South African women on US Agency for International Development (USAID) for health services?
While US funding has been prohibited from directly funding abortion services since 1973, (due to the Helms amendment) it has supported fertility planning by way of contraception, education and information.

How does Marie Stopes operate in conjunction with health services in South Africa?
We aim to provide low cost, quality healthcare services to as many women as possible in a way the complements other health services, and where needed, support in filling the gaps. For example, while many government health centres do a great job of providing contraception services, safe abortion care is often lacking. In some areas we have direct partnerships with government to help meet the unmet need for safe and legal services.

What does the Global Gag Rule mean for South African women?
While the immediate effects of this policy will not hit South Africa as hard as other countries that depend heavily on US funding to deliver services, this will have a long-term negative effect on the quality of care and information available to South African women when they seek sexual and reproductive healthcare.

The Gag Rule prohibits organisations with any US government funding from providing even referrals or information about abortion. It will wash away all the groundwork we have laid aimed at better integrated services. This includes work with programmes dealing with sexual violence, HIV/AIDS and youth health and rights. Comprehensive sex education will be negatively affected in that programmes that depend on US funding will have to make a decision on whether or not to include or exclude vital information on abortion.

We have also found that, on the ground, many organisations and government bodies that receive US funding are not always aware of the details of the regulation so simply avoid the topic of both abortion and contraception entirely. Those who don’t agree with the provision of abortion care may even use the policy as a smokescreen for undermining the smooth delivery of services and the right to healthcare and dignity that women are entitled to under both the Choice on Termination of Pregnancy Act (amended 2008) and the South African Constitution and claim it is due to fear of losing funding. Over time, this will produce a huge knowledge gap around abortion (already not well understood in our context due to stigma) and run the risk of women not receiving the referrals they need to access services safely.

Why is it important for women to have control over their own reproductive healthcare?
The heartbreaking thing about the Global Gag Rule and the way in which politicians (ironically, mostly men) are using abortion for political grandstanding is that it robs women of their bodily autonomy and of the right to make decisions about their own bodies.

Abortion and contraceptive issues are personal healthcare choices that should be between a woman and her healthcare provider. Instead women’s ability to access not only services but basic, unbiased, helpful information about reproductive health services is now threatened. This will not serve to give women more choices, and is likely to result in increased stigma, greater issues with access and very possibly a rise in the number of women seeking unsafe, informal routes to have an abortion.

This is why political moves like the Trump administration’s recent executive order are so dangerous. They make a personal choice a matter of public discussion and, in doing so, call into question every woman’s right to choose.

Author’s note: Marie Stopes International previously received funding from the USAID. Since the Gag Rule was implemented, it released a statement saying it will not agree to the conditions of the rule and therefore will no longer receive USAID funding.