Home Cartoons Who needs a xenophobic mob when we have the SAPS?
WhatsApp
Facebook
Twitter
Email
Print 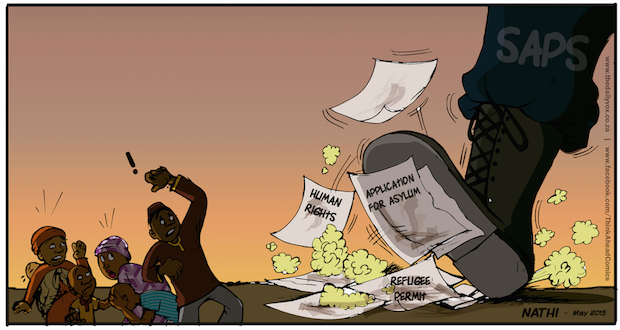 This week Lawyers for Human Rights went to court to sue for access to hundreds of immigrants detained following a raid on the Central Methodist Church last Friday.

The dawn raid was conducted by the SAPS, with support from the SANDF, and officials moved quickly to begin deporting the foreigners they’d rounded up â€“ until a court interdict prevented them from doing so without allowing lawyers to speak to those who had been detained.

A Zimbabwean who was forced out of the church and taken to Johannesburg Central Prison â€“ the infamous John Vorster Square â€“ told The Daily Vox that officers had prevented people from retrieving their permits and deliberately fudged the paperwork.

The entire debacle makes a mockery of the SAPSâ€™Â stated values: to â€œprotect everyoneâ€™s rights and to be impartial, respectful, open and accountable to the communityâ€.

With the state showing its willingness to implement its own form of xenophobia, the question now is whether the law can protect immigrantsâ€™ rights.