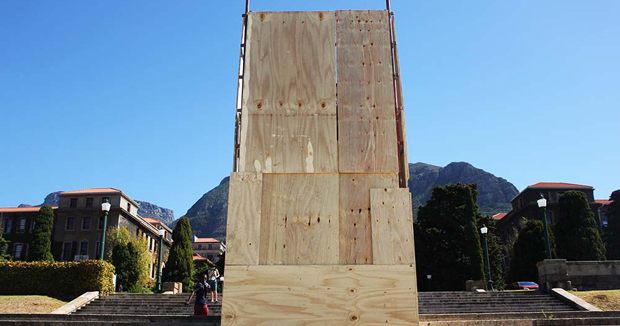 If leaderless protest movements like Hong Kongâ€™s Umbrella Revolution and the unrest in Ferguson are anything to go by, there’s a danger theÂ Rhodes Must Fall movementÂ may fizzle out before any real transformation is achieved, argues RA’EESA PATHER.

Student protests have long been a catalyst for change in South Africa. In the heyday of the anti-apartheid movement, protests were tightly structured under vertical leadership bodies who organised in small groups, knocked on doors and used posters to drum up support. But in the digital age of leaderless resistance, things have changed.

In theory, movements like Rhodes Must Fall seem like a microcosm of what an egalitarian society could be like. But in practice, movements without vertical leadership structures have fallen as quickly as they have risen.

Activists likeÂ David Graeber, who was active in the Occupy Wall Street protests in the US, believe that technology and the “interconnections of communication” they bring, enableÂ people to communicate and act effectively without formal leadership or information channels.

â€œItâ€™s a little like ants meeting in an ant-heap, all waving their antennae at each other, and information just gets around â€“ even though thereâ€™s no chain of command or even hierarchical information structure. Of course, it would be impossible without the internet,” heÂ writes in a book on the global justice movement, Direct Action: An Ethnography.

Occupy Wall Street (OWS) â€“ which saw Hollywood rockstars rub shoulders with some of the USâ€™s disenfranchised populaces â€“ went out with a whimper, leaving the USâ€™s 1% still very much intact, and its 99% still struggling with more dimes than dollars.

The experience isnâ€™t just limited to OWS. In 2014, student protests in Hong Kong would hypnotise the world with the sheer peacefulness, humanity, and politeness of masses of students who came â€“ armed with their schoolbooks â€“ to demand that they be allowed to elect their candidates for leadership in the run-up to the 2017 elections.

Their idealism and enthusiasm was contagious, and parts of the world rallied behind them, just as student groups atÂ Oxford University and even in Brazil, have backed Rhodes Must Fall. The protests in Hong Kong were dubbedÂ the Umbrella Revolution, but the title was premature â€“ there was no revolution.

â€œItâ€™s our goodbye party,â€ 18-year-old Marco ChanÂ told the New York TimesÂ earlier this year, on the movementâ€™s final night of protest. â€œThere will not be a second time to have such experience â€” to live with these people on the street for two months.â€

Chan’sÂ experience was marked by the wonder of public occupation, but not the success of Beijing conceding to the studentsâ€™ demands, because that never happened.

The Rhodes Must Fall movement is, of course, racially charged, but even the dedication of battling against racism canâ€™t ensure a win. Support forÂ the leaderless #BlackLivesMatter movement, which was born out of communityÂ unrest in Ferguson, Missouri in the US , still echoes across social media, but there has been no sweeping or radical change in the wayÂ police in the US treatÂ black people.

Racial profiling and stop-and-friskÂ methods areÂ still in use, and racial profiling is still the way some police officers determine their suspects.Â Less than a month ago, a white policemanÂ shot and killed an unarmed black man, who was said to be suffering from mental illness, in his apartment complex.

In the case of Rhodes Must Fall, the movement has spurred debate and perhaps spread consciousness around the issues that still plague UCT: its lack of transformation, its institutional racism, and its lack of accountability for its failures.

But after the statue falls, and a small victory is celebrated, how will the movement ensure that its broader goals of transformation are still on the agenda? Will Rhodes Must Fall transform itself into a sustainable organisation, or will it simply peter out like otherÂ leaderlessÂ movements before it?