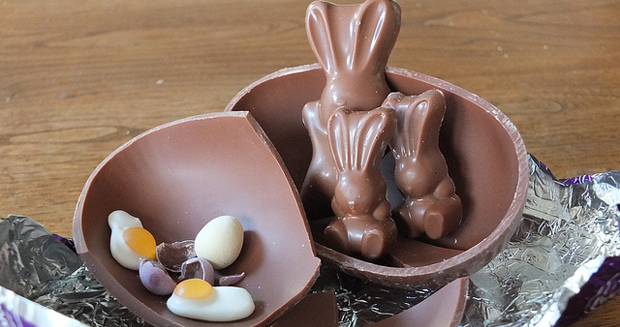 What does a floppy-eared, furry bunny have to do with Easter? Well, nothing. The Bible doesn’t mention the egg-laying rabbit in the story of Jesus’ resurrection, but over the years, the Easter bunny and the chocolate it delivers has become a favourite tradition. RA’EESA PATHER rounds up three facts about the mysterious rabbit. A rabbit might seem an odd tradition to mark the resurrection of Jesus – one of Christianity’s most significant events – but the mammals, known for their robust breeding, have historically been symbols of fertility and new life.

It is said that when a group of Germans arrived in the US in the 1700s, they brought with them the myth of a hare that could lay eggs. Other sources say the Easter bunny is actually a pagan tradition – legend has it that Eostre, a pagan goddess of fertility, used the symbol of a bunny. But what’s more important than the bunny, is the chocolate he brings.

2. The bunny that lays (chocolate) eggs During the 13th century, churches encouraged their followers to give up eggs for Lent. When Easter Sunday came, congregations were finally allowed to eat them again, and the eggs have now become a signifier for Easter. Only the Easter eggs of today are, thankfully, less eggy and moreÂchocolatey.

The traditions of the Easter egg also arrived in the US with the Germans. The hare that could lay eggs, named “Osterhas” or “Oschter Haws”, traveled with German immigrants to Pennsylvania, where their children continued to build nests so the bunny’s eggs would have a home. Until the children ate them, that is.

In the 17th and 18th centuries, the eggs began to take on the form of gifts Christians gave one another. Egg-shaped toys were manufactured for children, and women could adorn themselves in jewels shaped like eggs. The chocolate came in the 19th century, when the French and Germans won the hearts of children with their artistic chocolate eggs.

3. It’s not all about the bunny While many children around the world eagerly wait for the Easter bunny to deliver their chocolate, there will be some anticipating the arrival of an Easter cuckoo. In Switzerland, the world’s chocolate capitaland home to the famous Lindt bunny, chocolate cuckoos, eggs, and cakes are laid out to commemorate Easter.

But a rabbit is so much cuter than a cuckoo. Just don’t ask us if the egg came before the bunny.

– Featured image: By Spirit of Easter via Flikr.