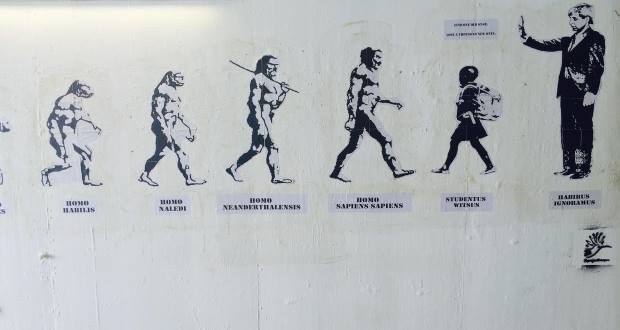 Protest graffiti at Wits University depictingÂ vice-chancellor Adam Habib putting a stop to the chain of evolution caused a stir on campus this week. The work has since been removed butÂ AAISHA DADI PATEL tells us why we shouldnâ€™t ignore its message.

The protest art, which appeared in the wake of the discovery of fossils of homo naledi last week, shows development in the evolutionary chain being stunted after ‘Habibus Ignoramus’ shows his hand to turn away ‘Studentus Witsus’ – drawn as a black school child.Â An anonymous organisation calledÂ Project HoopoeÂ has takenÂ credit for the graffiti.

The graffitiÂ implies thatÂ while Habib and the WitsÂ management team has beenÂ happy to claim credit for the fossil finding on behalf of the university, theyâ€™ve been less vocal in responding to issues raised by disadvantaged, black students who feel discriminated against by the university. Many students who passed the graffiti said that the message resonated with them.

“Itâ€™s heartbreaking. This label gave me a chill,” said one student walking past the art.

“The intent and the message of this is good. He is heading this institution, but doing nothing to change it,” said another.

“This is not an accurate reflection on how Habib treats black students. He’s just inherited problems which exist on a national level. It isn’t his fault,” said another student.

While Habib is widely considered to be particularly transformation-mindedÂ by the general public, he has also been accused of acting unilaterally in matters of student politics and many students at Wits see him as repressive and obstructionist when it comes to transformation.

“Habib …Â remains part of structures that stifle debate. This picture is embodying the frustration and outrage at this,” says Shaeera Kalla, current president of the Wits SRC.

The graffiti was removed on Tuesday.