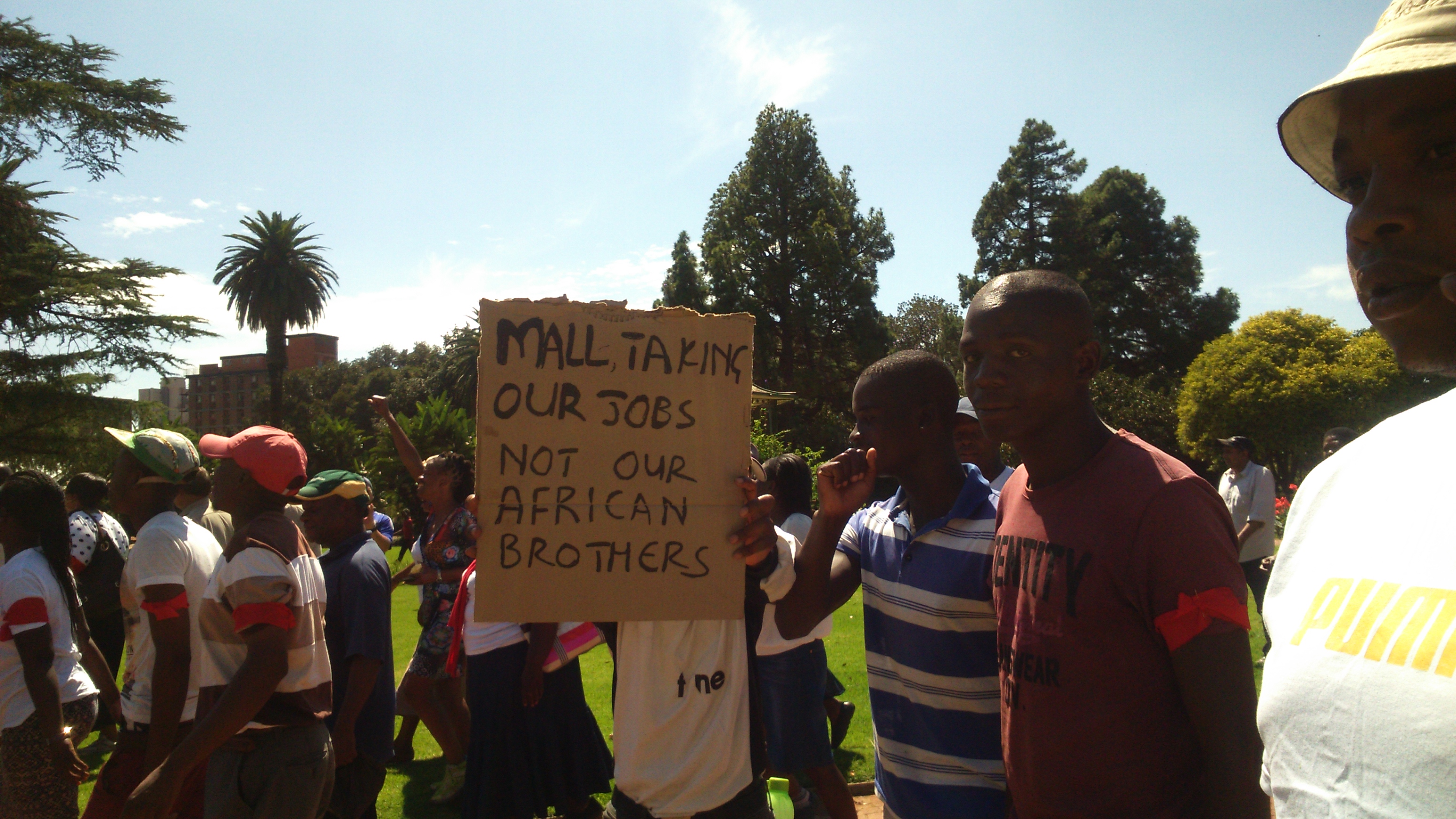 21 March 1960 was the day of the Sharpeville massacre. The non-violent protestors on the day were challenging the apartheid regime’s pass laws, which restricted the right to freedom of movement for black people in South Africa.

In 2017, it’s no longer the dompas laws but a neighbour, political leaders, employers, who threaten the right of Black Africans and Asians to move freely and with dignity in South Africa. This is xenophobia. Afrophobia. Now this violence, subtle as well as overt, perpetuated against poor Black Africans and Asians has become endemic to South Africa.

Black foreigners in South Africa have not been spared from hate driven by fears of exacerbated struggles for employment, safe neighbourhoods and the loss of romantic opportunities because “they take our women”.

If fear by Black South Africans fuels hate for Black foreigners, what does the fear experienced by Black foreigners fuel? I am in no position to respond to this considering my own privilege in this matter. What I do know is the political lethargy I have when I recall primary school experiences in the early years of democratic South Africa at the former Gazankulu region. This was one of the regions made home by some of the Mozambicans who fled the Frelimo-Renamo instability from 1985.

They were denied recognition and forcibly deported by the South African apartheid government. It was only in 1996 that the South African cabinet agreed to grant migrants from the Southern African Development Community (SADC) limited amnesty. This amnesty process was marred by complexities including corruption, lack of access to information, costly application process which resulted in thousands of migrants getting the short end of the stick, as Human Rights Watch would later report.

There was a period in primary school when classmates would be absent from school fearing deportation. Rumours would circulate about big trucks making the rounds, looking for anyone with a distinctive mark on their shoulders. Songs teasing anyone and anything of Mozambican origin would be sung during breaks. Shame followed any child singled out in the process like a wet shadow.

News of a letter sent to parents by Eastleigh primary school threatening to bar pupils of foreign nationality if they did not have verified documentation, revived memories of how Black children are exposed to fear, hate and shame.

It is sustained by our failure to organise for resistance

The 2008 xenophobic violence forced many of our leaders from government, religious groups and civil society to take action. This tragic time in our democracy exposed deep failures. There were the usual denials by government leaders, with former president Thabo Mbeki claiming that it was not xenophobia but acts of criminality that were fueling the violence. Why the two needed to be independent of each other still baffles me today.

Funds, research programs and tasks teams were set up after these xenophobic outbreaks to assess what had happened, and we vowed that never again would we allow it to happen.

Among many efforts by civil society groups was a three-year campaign run by Doctors Without Borders (MSF) and the creativity of Keleketla! Library and Mehlo Maya which I became a part of. The community engagements and activities from this campaign exposed me to the eroding nature of organising in most of our communities in South Africa.

Today, the thriving form of organising around issues of injustice is inspired by political parties’ mobilisation for members. At every corner of the most remote community, you will find branch leaders. Add to this the religious organising which hails super-spirituality over realities of injustice and bureaucratic non-governmental organisations, all serving the need to strengthen brands.

Although necessary in part, these forms of organising silence the need for our communities to prioritise organising on issues that fuel political, economic and cultural injustice. Our institutions, from government to the private sector, do not incentivise independent organising that challenge the status quo. Any form of organising perceived to be independent of party political influence is labeled the invisible “third force”.

Gavin Andersson, a global expert on self-organisation, speaks of a growing need to “organise for” instead of our comradeship instinct to “organise against”, as we successfully did under apartheid. If xenophobia were acknowledged as a crisis in South Africa, there would be ongoing organising to build resistance.

“Organising for” would ensure that issues that fuel xenophobia in our communities are constantly engaged with and never forgotten. The success of the anti-pass laws movements was not only because of the organising by the Pan Africanist Congress and others. The shared Black struggle for survival kept the need for resistance alive.