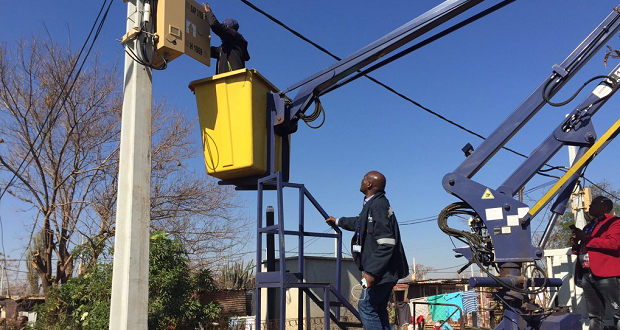 According to the NGO, SERI-SA, the Thembelihle settlement â€œwas established on municipal-owned land in the mid-1980s by rural migrants and employees of a brick manufacturing company.â€

Years, and many, many protests later, the settlement is formally being electrified.

The process of electrification has however been arduous, as residents, through the years, have resorted to illegal connections to power their dwellings. City Power, the Johannesburg power utility, has attributed recent power outages in the city to illegal electricity connections in places like Thembelihle.

In a place like this, illegal connections have been a norm.

A stroll through the densely populated settlement exposes the masses of illegal electricity connections jostling for space with children holding onto their dolls, careful to avoid live wires as they play in the shade of the shacks in Thembelihle. A coil of these cables loom over their heads, and the children know that the slightest mishap could result in death.

â€œOur parents told us these things are dangerous so we know that we shouldnâ€™t play with them. But some children didnâ€™t listen and now theyâ€™ve died,â€ said 11-year-old Tholakele Majola. Approximately 6,500 out of the 8,000 stands at Thembelihle informal settlement in Lenasia, south of Johannesburg are connected illegally to nearby electricity boxes and street lights. The informal settlement is said to host 20,000 shacks. Residents pay anything between R50 to R80 as a once-off fee to get their homes electrified, and continue paying this amount if the cables need to be fixed or reconnected on a weekly or monthly basis.

#LocalElections #Zuma: You can’t call the Thembelihle people who take electricity izinyoka. You criminalizing them. They connect themselves.

According to City Power spokesperson Hloni Motloung, over 80% of the outages in the south of Johannesburg are as a result of network overload, caused by backyard shacks connected illegally into the network – through bypassed meters from the main houses.

Motloung added that the Lenasia depot technical team has been replacing faulty equipment as a solution to the problem. The equipment has been failing repeatedly due to continuous overload as a result of meter bypass and illegal connections. However activist Nhlakanipho Ndlovu, who lives in Thembelihle, argues that residents have had no other plan but to connect electricity illegally because government hasnâ€™t delivered on its promises. â€œThese are basic services that people shouldnâ€™t be struggling for, they need it and government is not providing it. Iâ€™m in support of residents because people have been protesting for electricity for over 10 years and the government hadnâ€™t done much until recently,â€ Ndlovu said.

While residents of the informal settlement are in the process of having electricity meters installed in their homes, many of them donâ€™t know how the meters will operate.

â€œI donâ€™t know how itâ€™ll work. I was just told that weâ€™re getting meters installed and weâ€™re getting electricity. I have waited many years for this to happen because itâ€™s been difficult over the years without electricity,â€ said Nosisi Mthembu who cut off her illegal connections three years ago when it began making her home unsafe for her three children.

â€œSome days youâ€™d get a shock from just touching the door or the shack itself. That’s when I realised that it was no longer safe for my children. I cut off the wires and weâ€™ve been using paraffin and candles ever since,â€ Mthembu said.

Motloung said City Power had taken various steps to curb the illegal connections, including mobilising technicians in teams per area and allocating a transformer zone per team.

â€œThe scope of each team is to unbridge all the meters, remove illegal connections, balance the load amongst the phases, replace the missing fuses, lock the protective structures and fix/replace the faulty equipment, deploy intelligence to catch those responsible for bridging meters,â€ he said.

Cable theft is another challenge City Power is facing, with the utility spending over R267 million to replace copper cables with Aerial Bundled Conductors (ABC) to reduce power outages and curb cable theft.

Cable theft hasÂ conservatively estimated to cost the South African economy about R5 billion a year directly and indirectly. â€œThe industry has lamented the scourge of cable theft and has collectively lobbied government to classify cable theft as an act of economic sabotage due to the debilitating impact of cable theft on the economy,â€ said Motloung.

Featured image via CityPowerJhb on TwitterÂ