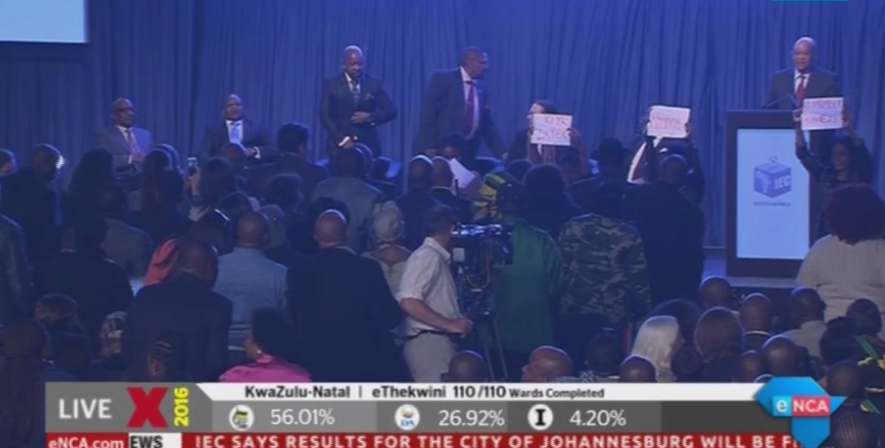 A small group of protesters held up posters in solidarity with Khwezi, the woman who accused President Jacob Zumaâ€™s rape, 10 years ago. Â

As soon as President Zuma took the stage, following the release of the results of the 2016 municipal election results, four protesters stood in front of the podium and held aloft A4-sized placards, that read, â€œI am 1 in 3â€, â€œ#â€, â€œ10 years laterâ€, â€œKhangaâ€ and â€œRemember Khweziâ€. The president’s speech was drowned out by the searing silence of the protesters.Â

After Zuma delivered his address, security led the activists away. One speaker, whom we have not been able to identify, apologised to Zuma for the disruption. The protesters were heard screaming as they were escorted out.

#RememberKhwezi silent protest, and the way it was dealt with speaks volumes. Nothing very honorable about our Honourable Mr President…

Silent protesting girls are in a room – protected by police, no one allowed entry. #IEC l

That silent protest was so powerful. The fact that people (including myself) are asking who Khwezi is proves the need to #RememberKhwezi

One of the activists Simamkele DlakavuÂ sent out a tweet shortly after the group was forcibly removed from IEC Results Operation Centre.

While ANC Secretary General Gwede Mantashe said the protest was proof of the strength of South Africa’s democracy, the ANC Women’s League was not quite so understanding.

Speaking shortly after the IEC’s guests had left for a gala dinner following the declaration of the results, Bathabile Dlamini demanded an apology from the electoral commission.

â€œNo head of state should be treated like this,â€ she said.Â â€œWe demand that the chairperson of the IEC apologises to the president and it must be done with immediate effect.â€

Editor’s Note: One of the activists has been identified as an intern at The Daily Vox. We were not informed in advance of the protest nor are we connected to the protest action.