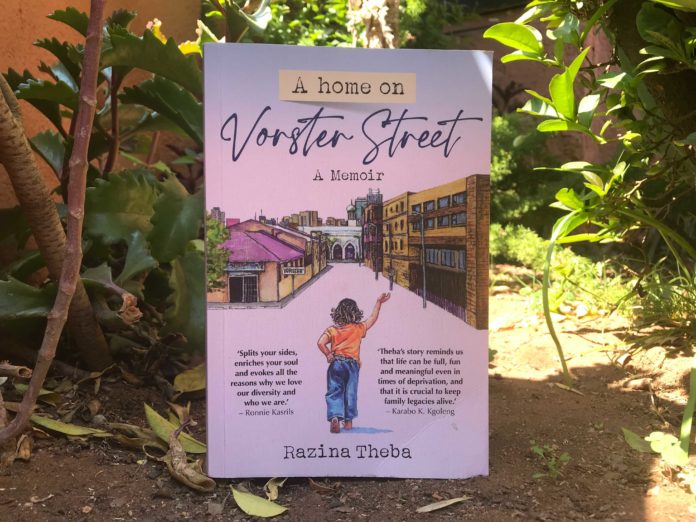 An excuse not to return to practising law and a desire to capture her family’s history. That’s the reason why Razina Theba wrote A Home on Vorster Street. The book is a memoir, a call to bear witness and an intimate look at one family.

The Daily Vox team chatted with Theba about her book.

A Home on Vorster Street: An Extract

The book, published by Jonathan Ball Publishers, is a relatively quick read but it is packed with so much emotion and heart. It follows young Razina and the times she spent in her grandparent’s tiny flat on Vorster Street in Fordsburg. It is filled with funny anecdotes of times spent with her grandparents, aunts and uncles and cousins. There are hilarious stories of the neighbours in the yard and what they would get up to. But the book also features stories from before Theba was born.

Those stories were compiled from listening to the elders in her family speak. Anyone familiar with oral storytelling traditions in their families will relate to those stories. It is the stories which are told during funerals and weddings. It’s the stories the younger people often complain about hearing for the “hundredth time”. Yet it is those stories that often contain the very important histories of a family.

It is for this reason that Theba wrote the book. She wanted to ensure that her children would have a piece of her history with them forever. “I wanted to capture what life was like for them. I also wanted to bring in the people who made me who I am,” she said. Theba wanted to show her children the impact of those people on her life. She also wanted to share  lessons that she learnt. Theba said that all she did differently from the tradition was to put the stories down on paper.

There’s an African proverb whose origins can’t really be traced which says “It takes a village to raise a child”. Theba’s book is proof of that. With her own upbringing and the stories of her mother and her siblings, it’s shown how everyone had a hand in raising the children. Some of those influences might not have been entirely positive but all of those affected her in some way.

“It is a story about the connection between what our lives were then and what they are now,” she said. This clearly comes through in the book in big and small ways. Theba writes about how as a child, she would spend the holidays with her cousins at her grandparents. They would eat good food, watch Bollywood movies and go on exciting adventures.Now they use Whatsapp to communicate with each other. It is those little changes which say so much and emphasise the importance of preserving those memories.

Theba said she knows her book might not change things or have any drastic impact. But she just wanted to show how people lived and loved during apartheid. This is reflected in the book. “The intimate lives is the part I wanted to put my lens on,” she said.

The book is an attempt to memorialise people and to ensure they are not forgotten. Many of the people Theba wrote about have passed on but through the book, their lives and memories are sort of preserved.

“This is my acknowledgement that people pass but what they are stays with us,” she said. This is especially important during this global pandemic where everyone is surrounded by so much loss and grief.

The book ends on a poignant note. Theba visits the yard where she spent so many of her childhood days. It was during the initial days of lockdown that she made this visit. It actually happened due to a slight confusion in a conversation with her publishers. They told her to end the book on Vorster Street so Theba literally went there to find her ending.

The area where her mother grew up and her grandparents lived is now mainly inhabited by immigrants from the subcontinent. While Theba says she identifies as fully South African, her grandparents were immigrants when they lived in the yard. So the ending of her book shows as much as things change, they remain the same.

Just like Theba wrote the book to show her children how much easier their lives are, her mom tells her the same thing about her life in the book. In these times of dramatic change and conflict and uncertainty, this message is kind of comforting.

The book published by Jonathan Ball is available at all good bookstores and online.