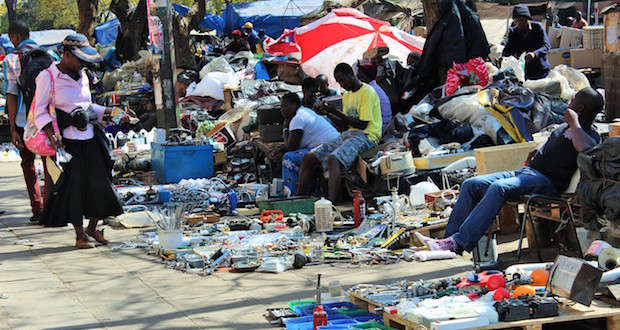 The rand was in free-fall after the axing of Nhlanhla Nene, former finance minister, and although it’s now in recovery the impact is still being felt in neighbouring Zimbabwe. TENDAI MARIMA reports.

On the streets of Zimbabwe, the rand is falling. Thanks to South African President Jacob Zuma’s surprise firing of Finance Minister Nhlanhla Nene last week the rand has tumbled from $1:R14 to as low as $1:R20 in the country next door, where currency exchange rates are controlled by the black market rather than the central bank.

While the re-appointment of Pravin Gordhan as finance minister might steady the rand’s fall and cool the tempers of South Africans petitioning and tweeting #ZumaMustFall; for Zimbabweans, the depreciation of the rand is probably irreversible in the short term.

It’s not all bad though, just complicated.

Our multiple currency system allows us to use the dollar, the euro, the pula, the pound and the rand in everyday trade, and every time the rand drops, the rates change. Depending on which part of the country one lives in, rates now start as low as $1:R16 to as high as $1:R20 when using coins in some parts of the southern city of Bulawayo, while in the north-western tourist resort town of Victoria Falls, where currency flows like the mighty waterfalls, notes are swapped at $1:R18.

But in other places where the flighty rand is unloved, it is rejected.

Over the year, the devaluation of the Chinese yuan, the Greek crisis, student protests and fears over US interest rate hikes have seen the monetary unit of Africa’s most industrialised economy fall so much that sections of our poorer economy don’t want do business in rands at all.

Before the rand’s latest fall, I travelled through Gweru, a small city near the centre of the country and all I had were randsÂ butÂ nobody wanted them.

In Gweru, I couldn’t buy food at the takeaway restaurants and the vendors wouldn’t sell me bananas or phone credit because, they said, the shops wouldn’t accept my coins when they tried to swap them later. But given Zimbabwe’s problems withÂ change (there isn’t any), refusing rand coins seems unsustainable and shortsighted.Â Rather,Â Gweru’s sidewalk forex traders should consider setting a new rate for rands, otherwise some shops could go back to giving sweets and IOU vouchers for change as they did in years gone by.Â Those were strange times in the capital, and I wouldn’t want to relive them.

As we head towards Christmas and the rand tries to steady itself post-Nene, rand-dollar rates are pretty sweet for Zimbabweans crossing the border to do their Christmas shopping in South Africa. For a change, forex sellers illegally milling about the country’s borders and buses aren’t ripping people off or hoarding rands in big black trunks as they used to when the hyper-inflated Zimbabwe dollar was still in use.

But while the falling rand is good for shoppers and cross-border traders importing cheap (sometimes fake) products en masse, these imports don’t necessarily translate to lower prices. It just means more mass produced South African and Chinese goods will flood Zimbabwe’s markets, and have an adverse effect on higher-priced local goods and the national import bill.

And because the dollar is king here, migrant workers coming home with pockets full of hard-earned rands, should also be prepared for a shakedown. They get my sympathy, but they know, like I know, hustling is the way of life in this house of stone.