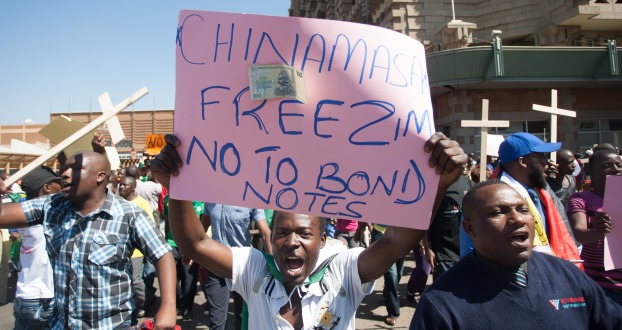 Marching Wednesdays seems to be the country’s new fad since the citizen movement #ThisFlag and civil servants’ strike shut the nation down on the 6th of July. After weeks of Zanu PF demonstrators dominating the streets of the capital, pro-change protesters had their turn to march against bond notes, a local US dollar-backed currency proposed as aÂ measure to resolve the country’s cash shortages and stimulate exports. Unfortunately for many, bond notes, among their many other complications, sound like an attempt to bring back the defunct Zimbabwe dollar through the back door. And this Wednesday’s marchers weren’t having any of it, so off they went, led by the Tajamuka group (“We don’t want” in local Shona) to deliver their petition to the Ministry of Finance and Economic Development at the (not-so) New Government Complex.

But things got ugly, as they often do.

Our Constitution guarantees freedom of expression, assembly and protest, but the police came armed with teargas, baton sticks and water cannon trucks to clamp down on those very rights. The irony of a government begging for money from international lenders having its police harass protesters on the doorsteps of the Ministry of Finance is not lost on me. Perhaps the security forces might not get it, but it’s rather self-defeating to beat people, when lenders say they won’t give their money if rights abuses continue.

I went byHarvest House hours after police had fired canisters into the building to snuff out those who’d sought refuge and the tingly smell of tear gas still clung to the air. The worst victims of the gassing, a six-month-old baby and MDC-T’s deputy spokesperson and parliamentarian, Thabitha Khumalo, had to be hospitalised. The baby, who’d been in a nearby shop when the incident occurred, was discharged, but Thabitha stayed.

I can’t describe what it was like seeing this feisty woman down and in the intensive care unit. As an asthmatic, she was badly affected by the fumes and she had tubes coming out of her nostrils and a drip feed attached to her wrist, barely unable to walk without assistance. It was an emotional moment I wouldn’t know how to properly express. I felt weak watching her quiver from the heavy doses of medication, but even in that state, she still had the strength to chat to me, and for that I salute her.

And before you ask me about journalistic ethics, I know, I know, but until I got into the room I honestly hadn’t even thought about it. Another journalist friend and I had raced to get to the hospital where she and the baby were with the intention of seeing the little girl’s mother. That’s who I wanted to see, not Thabitha. But as we stood inside by the door’s edge, she smiled and waved us in further.

She said she wanted to talk.

Between breaths, she said she was disappointed by the turn of events and questioned the police’s measures. She got me when she said, â€œI am battling to breathe.â€

For her, it may have been physical, but if this Wednesday’s police conduct is a sign of the future, then perhaps many others will battle to breathe engulfed by gas fumes and a sliding economy, hoping for a different Zimbabwe.

A letter for a Zimbabwe where fear cannot rule