Home Voices Can there be any logic to setting schools on fire?
WhatsApp
Facebook
Twitter
Email
Print 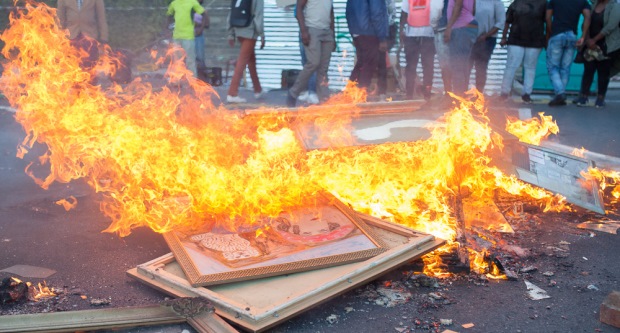 During a parliamentary debate on the crisis in Vhuwani this week, State Security Minister David Mahlobo blamed the protests onÂ “cowards” and “elements hell-bent [on causing] anarchy and lawlessness”. Arsonists have targeted moreÂ than 20 schools in Vuwani in the last two weeks, as the community battles with municipal demarcation conflicts. Â KWAZI DLAMINIÂ asked students in Durban how they feel about arson attacks against schools.Â Khanya Tshezi, 22, student, Umlazi
Burning things when you are protesting shows that you are a backward thinker. You canâ€™t complain about something while you are busy burning other things downÂ because that means after you are done, you will protest for the same thing you burnt down. I think the reason they burn things is because they want the government or their municipality to act on their grievances. There are better ways to make sure your complaints are heard without damaging things. The damages caused by the protests becomes another problem for the government and municipality. They should be charged and sent to jail. Syabonga Basi, 25, student, Sherwood
I think people burn stuff because they are angry. They are angry with their councillor, with their municipality and the government. However, I donâ€™t think burning of property is a good approach. How can you burn the future of your children? Out of all places, they decide to go for schools. I also donâ€™t understand how it even got to 22 schools with the government aware of what is happening. The only way to stop people from damaging property is to arrest those responsible,Â to set an example. Fikile Ntshangase, 23, student, Morningside
It is how people show their anger towards those in power who donâ€™t deliver [on] their promises. It is a bad way of showing anger as it does not benefit anyone, but affects the community. What happened in Limpopo was irresponsible from the citizens. Iâ€™m mostly worried about matric students, as they will be seriously affected by this act. Now they have an unfair disadvantage going to the final exams – they will have to work extra hard to catch up. The government should rebuild the schools but the perpetrators must be arrested and given no mercy. Phelo Sisila, 21, student, Umlazi
I think burning things is the way people achieve their hidden agendas. People are brainwashed by an individual who has a plan to cause havoc. I donâ€™t think thereâ€™s a sane person who would go and burn down a school. What is happening in Vhuwani is political-related, since the municipal elections are around the corner. Every political party wants to capitalise on the situation and learners are suffering. I also heard about the fire that took place at the University of Johannesburg, and it is reported that it will cost approximately R100 million to fix. That is very disappointing, especially considering the fact that itâ€™s a place of educated people. Sphamandla Zulu, 26, student, Siyanda
I think the burning of schools in Limpopo is done to discredit certain parties at the expense of students. It is theÂ worst thing you could do as a parent – just because you never went to school, now you want your children to suffer too. The government may be failing them but burning the future of their children and of the country is not a solution. The Fees Must Fall campaign was a good example of how you deal with governmentÂ – go to the Union Buildings if you want to do something. Not that I want them to burn down the Union Buildings, but that is the best way to look for answers. Not at schools.