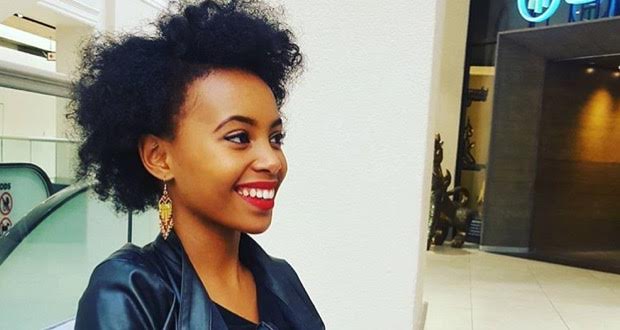 Celeste Khumalo was the last Miss SA Teen when the pageant ended in 2011. The 24-year-old model, actress, and businesswoman stars as Linda in Mzansi Magicâ€™s The Queen, and runs Republic Nails, a nail bar in Pretoria, all the while studying towards an MBA. The Daily Vox caught up with her to talk about her busy life and her experiences in the entertainment industry.

I always wanted to be able to both work in entertainment and run my business at the same time. I canâ€™t always say I balance everything well – there are always challenges. I have class in the evenings, and Iâ€™m lucky to run my business with my mother, which makes it easy for me to be flexible. When Iâ€™m on set, itâ€™s four days a week, 6am to 6pm. But in between filming my scenes, I have time to do whatever else I need to.

Iâ€™ve been working since I was 16. I started in the retail industry. I did sales, and promo work, and then started modelling. My weekends and holidays were always full. After matric, I wanted to study, but there were no funds. I did apply for NSFAS, but there was always financial stress – I couldnâ€™t even always afford to pay my school fees. This was one of my main motivations to enter the Miss Teen SA competition – my mom said hereâ€™s a competition, and one of the prizes is a full bursary; you have nothing to lose. And Iâ€™ve never looked back.

I love the work that I do, but it is always challenging. The fact is that entertainment industry is a very superficial one, and thatâ€™s the way it is, especially with modelling. When I get a brief, it is explicitly stated what kind of girl theyâ€™re looking for. When you get booked on shoots, on paper youâ€™re just â€œblack girlâ€. I donâ€™t find the term â€œyellowboneâ€ derogatory – if thatâ€™s a colloquial term, thatâ€™s South African culture – it is what it is. Itâ€™s not an insult or a compliment, itâ€™s just a label.

With my skin tone, Iâ€™ve been able to cross over for more American and European looks, but at the same time, Iâ€™m often considered too light for more â€œAfricanâ€ looks. Iâ€™m marketable in some markets more than others. That said, even in the international work that I do, I sometimes look a lot lighter in the ads than I am in reality, while in local work I sometimes look darker. Thatâ€™s all in the editing, and itâ€™s done according to what a mass market would prefer.

I do think maybe Iâ€™m lucky though, because Iâ€™ve never had a campaign where I look drastically different after. I know black girls who have seen their work after editing, and they donâ€™t even recognise themselves. The industry is confusing. There are mixed messages all over the place – itâ€™s contouring and eyebrows on fleek on one hand, and then all about natural looks on the other.

I think all these concerns about superficial things are a universal issue. I sometimes get the odd comments about the way I look; â€œWhere are you from? You donâ€™t look blackâ€, or â€œAre both your parents black?â€, or people will want to know where I went to school because I sound â€œpolishedâ€. It isnâ€™t explicit; itâ€™s all the subtle little things.

The industry is competitive, especially among women, and you have to be stronger than people realise. I think education is very important. Because entertainment is so tough, you need to be versatile, and be able to use your time wisely. My mother raised my sister and I by herself, and thatâ€™s had a huge influence on me. When we were growing up, she really struggled sometimes with handling everything on her own. That kind of situation pushed me. Where I am today has taken a lot of time and hard work.

There are things that I consider small things now that seemed impossible to do when I was starting out. Even now, having achieved all that I have, I know I still want to go even further.