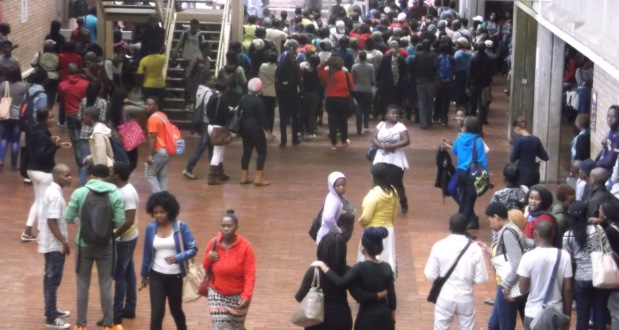 Cleaning and security staff have been striking for two weeks on UKZN’s Howard College campus. BANDILE MDLALOSEÂ sent us an update.Â

The workersâ€™ strike is on its second week at the Howard College campus. Some of the security staff is working while others are struggling for better treatment and justice. The workers demand to be the permanent staff and are tired of being outsourced since the company that has a contract with the UKZN is sucking their blood. Last week it was reported that the security guards that were hired especially for the strikers attacked the workers and one worker was arrested after they (the workers) were sjambokked by the other security company.

Howard College campus is in a mess these days with regards to the cleaning. On Tuesday, the SRC joined the workers in solidarity as they were chanting and singing struggle songs. And on WednesdayÂ they met at the Shepstone Building to carry on with the action (chanting and singing).

A memorandum was handed over last week to the VC but a response never came back. Instead, it was a letter from court that was read to the workers on Wednesday stating that they must leave the premises, the â€œleadersâ€ of the strike (some of the students) also went to see the Legal Resources Centre for the advice, due to the busy schedule of the students involved.

I tried to take some pictures as the evidence although I looked like a sellout who was taking pictures. Protesting students did not want pictures taken of them.

Some people do not understand the power of the media or what struggle is about – sacrifice. When you are busy fighting you do not worry whoâ€™s taking pictures of you, especially if you know what you are fighting for is eligible and [an issue of] justice to you unless you have something hidden behind what you are doing.

All images by Bandile Mdlalose.
Edited for brevity and clarity.