Home Reporters' Notebooks “Consider how I felt when accosted by a stranger on a dark...
WhatsApp
Facebook
Twitter
Email
Print 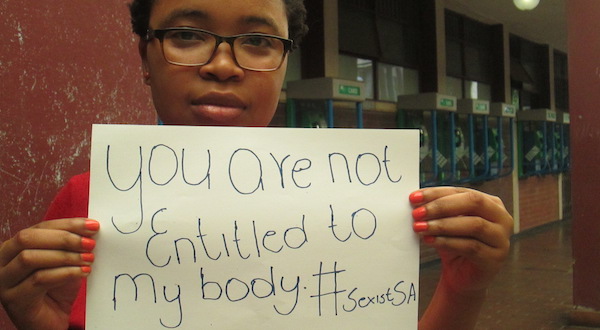 Ass groping, suggestive stares and catcalls are but some forms of street harassment that South African women are subjected to by men each day. We endure this abuse in taxis, bank queues, street corners, lecture halls and even churches. No one reprimands this behaviour and we simply carry on with the scars, as if nothing happened. Any kind of response usually invites more abuse, and if you are tjatjarag a ‘hot klap‘ will shut you up. Anything can happen, people say, it is not right but what can we do?

For my own part, I have created an imaginary line that, when crossed, I feel compelled to act, no matter how scared I am. While walking to a friendâ€™s place to watch the Arsenal versus Manchester United game this week that line was crossed.

I came across a group of young men who started with the usual comments – â€œHey baby, my size, upakile (you have a huge behind)â€ – as I approached. Iâ€™m used to that. It happens every day. It doesnâ€™t prompt a reaction, but that does not make it acceptable.

This time things escalated fast. One of the men stepped in front of me and demanded that I stop and â€œtalkâ€.

Apart from the fact that I was rushing to my friend’s house, I donâ€™t speak to uncultured men who feel entitled to my time and attention at every street corner. But this man blocked my attempts to get away with his huge frame. He started touching my me inappropriately, to the pleasure of his spectators, grabbing by buttocks and aligning his penis with my vagina.Â He felt entitled to my body and I felt violated in the worst way possible.

I suffer from haphephobia – the fear of touch. A surprise hug is likely to land a haphephobic like me in a doctorâ€™s room. To get to the touch stage with me is a process, whether with friends, family and even my mother and son. A single tap in the back has the potential to induce a panic attack in me. I prepare emotionally and physically before I initiate a hand shake or a hug.

Now consider how I felt when accosted by a stranger on a dark street in Berea, with his unsolicited touches and his talk about what he wanted to do to me.

He justified his actions the usual way – thatâ€™s how he appreciates beautiful women, I should be grateful for the compliment and stop being a drama queen..

My whole body was shaking with anxiety but I managed to swear at him with every Xhosa swear word I could remember. Eventually he let me go. I was relieved at being able to walk away, even though I was humiliated.

My condition does not make me special. There is not a single women I know who enjoys this.

To the men on the street that night I would like to say, we do not want to cross the street when we see you. We would like you to allow a comfortable space between us in a queue. We would like to sit next to you in a taxi without fearing that you will try to touch our thighs. We want to be able to walk past a group of you and feel safe.

This casual abuse of women needs to stop.